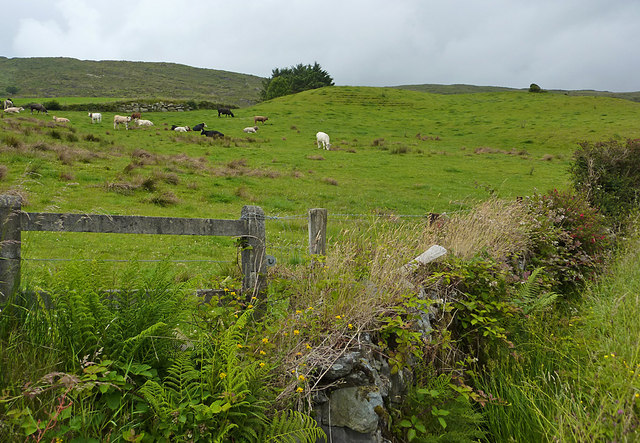 Cattle grazing near Curraglass in July 2010 (Photo by Eileen Henderson)

Lisnabrin belonged for many years to the ancient Coppinger family; when Sir Walter Raleigh acquired most of the surrounding land he became friendly with them to the extent of acting as Godfather to one of their children. Lisnabrin’s subsequent Croker family history began with an unusual marriage, rather romantic in its way.

The Grange, an elegant Georgian style Rectory (1840) in wooded grounds, is run by its friendly owner Kevin Ryan as a rather good B&B.

Conna (Conaithe) (pop. 300) is a picturesque village situated on the River Bride.

Conna Castle, a five-story  Tower House built in the C16th by the Earls of Desmond, was the birthplace of Thomas Fitzgerald, who died insane in the Tower of London.

The Castle became forfeit to the Crown after the Second Geraldine Rebellion, and briefly belonged to Sir Walter Raleigh before passing into the hands of Richard Boyle, 1st Earl of Cork.

It was captured by Kilkenny Confederacy troops under Lord Castlehaven in 1645, assaulted but not taken by Cromwellian troops in 1650 (some say they merely fired cannons in passing) and burned in 1653, killing three daughters of the then occupant.

The castle passed to the Duke of Devonshire‘s family and was purchased in 1851 by Hilary L’Estrange. He left to his son, on whose death in 1915 the castle was willed into the care of the State, the first such property to be so bequeathed.

The Conna Harriers, a rather exclusive hunt, have Ireland’s only Trencher pack (hounds living seperately).

Bride Riverview House, a renovated Victorian dwelling, is run by the Scanlan family as a friendly B&B.

Ballynoe (pop. 600), once famous for its butter market, is nowadays probably best known for its annual point-to-point meeting, where some of the great National Hunt horses gain their first valuable experience of steeplechasing. These races have often attracted huge crowds. There are several breeding and training establishments in the area.

Ballynoe Forest is the name given by  Coillte to a vast area scattered with conifer plantations, stretching from Middleton to the county borders. In fact, most of this land is used for dairy farming and other forms of agriculture.

Kilasserragh, a nearby hill, commands great views of the local countrside, and is the site of a megalithic tomb.

Coole was an early Christian site of some significance, said to have been founded before 620 AD by Saint Abban, son of king Cormac of Leinster. Another holy man associated with Coole was Saint Dalbach (d. 779 AD), a member of the Uí Liathain.

This ruined early stone church is the oldest remnant of Coole Abbey. Made of stones of considerable size, the walls on three sides have been reduced to a little over 3ft in height, but the curved east wall remains standing and where the altar once stood there is a lancet-style window, like those found in Round Towers. The edifice probably had a wooden roof. (Photo – Castlelyons Parish)

The adjoining buildings, of which only the foundations remain visible, are thought to be later additions.

The ruins of a slightly larger medieval church stand in Coole graveyard.

Coole Abbey House, designed by Davis Duckart, was built c.1765 for the powerful Peard family, and was later owned by Orr McCausland, a landlord at the centre of a bitter controversy in 1889, when he took up a holding on land from which a man had been evicted two years earlier. Agitation against him was led by the local curate Fr. O’Dwyer, who was arrested and sentenced to five months in jail.

Kilcor Castle, originally a FitzGerald stronghold, was rebuilt c.1650 and added to considerably over the next two centuries, when it belonged to a family called O’Brien.  A tradition holds that, after the 1541 dissolution of the Abbey, elderly monks were sheltered at the castle. Fr. Cornelius O’Brien of Kilcor Castle was the local parish priest at the time of the Williamite Wars and the implementation of the Penal Laws.  Unusually for Roman Catholics, the family were able to resist confiscation, and held on to their estate until 1851. (Photo – www.buildingsofireland.com)

St Nicholas’ church at Kill-St-Anne, built in the C14th, is now a total ruin; all that remains is what appears to be a bell-tower and two large gothic arches. The gable end on the east-facing wall outlines what would have once been the chancel of the church. The smaller church located inside the archways was built in 1771 as a Church of Ireland chapel. The east wall of this church features a striking tracery window that is said to have belonged to the older church. The chancel is separated from the nave by a beautifully ornamented gothic archway.

The old cemetery dates at least to the C14th, and was in use as both a Church of Ireland and Roman Catholic graveyard up until the early 1960s. It contains some fine examples of 17th headstones and tombs, notably one from 1689 with a scrolled design, dedicated to Sylvestra Jessup and her daughter Sara-May, and those commemorating the Vowell and Peard families. Facing eastwards, alongside the churches, is the Barrymore Mausoleum, containing the remains of the 1st Earl, David, and his wife, their descendants and also relatives from Fota Island. (Photo by Sarah777)

Castlelyons (Caislean Ui Liathain – “the castle of the Liathain” – a family related to the Eóghanacht who ruled Munster) (pop. 220) is a photogenic and historically interesting village with a pretty park on the bank of the River Bride. 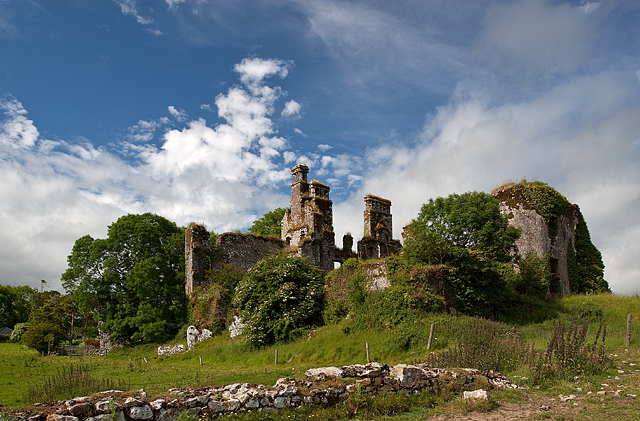 Castle Lyons / Barrymore Castle, probably originally a C13th Barry family stronghold, was rebuilt as a fortified Jacobean residence by David Barry, 1st Earl of Barrymore upon his 1621 marriage to Alice, daughter of Richard Boyle, the “Great Earl” of Cork. The mansion was commandeered by Parliamentarian troops under Sir Charles Vavasour fighting the rebel Kilkenny Confederacy, but captured by Lord Castlehaven following the of the English commander’s ignominious defeat at the Battle of Manning Ford near Glanworth. It was damaged in an accidental fire in 1771 and left to fall into decay. (Photo by Mike Searle)

Castlelyons Abbey was established in 1307 by John De Barry. The original foundation was for the Carmelites, but the Dominicans are thought to have lived there at one time, and Franciscans occupied it at the time of King Henry VIII’s Dissolution of the Monasteries.

The ruins now visible date from for the C15th. The main items of interest are the impressively long nave and chancel of the abbey church, separated by a tower containing a full spiral stairway.

The parish church of St. Nicholas (RC), situated on the edge of the village of Bridebridge, was erected in 1848. The small graveyard contains a Celtic Cross dedicated to one of the finest Gaelic writers of his generation, an tAthair Peadar O’Laoighre, author of the famous novel Séadna, who was parish priest of Castlelyons from 1890 until his death in 1920.

Another interesting person connected with the area was the mathematician William Brouckner, founder and first President of the Royal Society of London, who inherited the title Viscount Brouckner of Castlelyons which his father, a Royalist supporter, had bought in 1645. The title became extinct with the death of his son Henry in 1689. Whether any member of the family ever visited Castlelyons is not known.

Bawnard House was the home of Thomas Kent / Tomas Ceannt, one of four Nationalist brothers involved in a gun battle with police rounding up likely sympathisers following the 1916 Easter Rising in Dublin. In the early hours of 2nd May 1916 RIC Head Constable William Rowe was killed and David Kent was severely injured, while Richard Kent was mortally wounded in an escape attempt. Thomas and William Kent were both court-martialled for murder; William was acquitted, but Thomas was sentenced to death and shot by firing squad at Cork Detention Barracks on 9 May 1916. He is buried inCollins Barracks, Cork, while Head Constable Rowe is interred in Castlehyde churchyard cemetery. Ballyvolane House, built in 1728 by Sir Richard Pyne, retired Lord Chief Justice of Ireland, is now run by Justin & Jenny Green as an opulent Guesthouse, winner of the 2009 Country House of the Year Award. Catering mainly for anglers on the exclusive Blackwater Fishery,  they regularly hosts  specialised weekend courses on salmon fishing. Their breakfasts and dinners have gained an excellent reputation, making this a particularly popular venue for weekend house parties. A bloody legend associated with the place makes interesting reading.

Coole & Castlelyons are close to Fermoy on ByRoute 3.

Britway is the location of an atmospheric ruined church, thought to have been constructed by the same masons as the medieval edifice at Coole. Nearby there is an elaborate Holy Well.