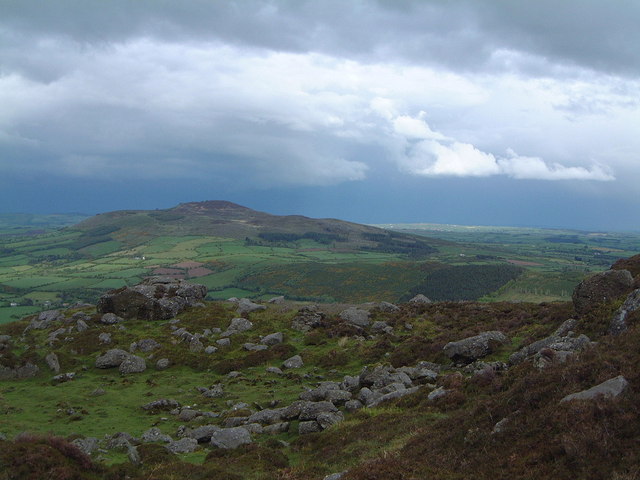 Fews, a crossroads hamlet, is the location of St Anne’s church (RC), which has fine stained glass windows by Watsons of Youghal.

Rossmire church (CoI), founded in 1831 and remodelled c. 1880, is an attractive edifice in well kept grounds. Kilmacthomas (Coill mhic Thomáisin) (pop. 1500), often called “Kilmac”, is situated on the banks of the River Mahon within view of the Comeragh Nountains. The village has some fine shops, pubs, tea rooms and a café. (Photo by Waterford_Man)

Oliver Cromwell marched from Waterford City to Kilmacthomas in December, 1649. The weather was wet and stormy and the river was in flood, so the army could not cross. Two nights were spent in the field that is now the town park.

Daniel O’Connell passed through on a campaign trail strongly opposed by Henry de La Poer Beresford, Marquess of Waterford, and wrote: “We breakfasted at Kilmacthomas, a town belonging to the Beresfords but the people belong to us. They came out to meet us with green boughs and such shouting you can have no idea of. I harangued them from the window of the inn, and we had a good deal of laughing at the bloody Beresfords. Judge what the popular feeling must be when in this, a Beresford town, every man their tenant, we had such a reception“. 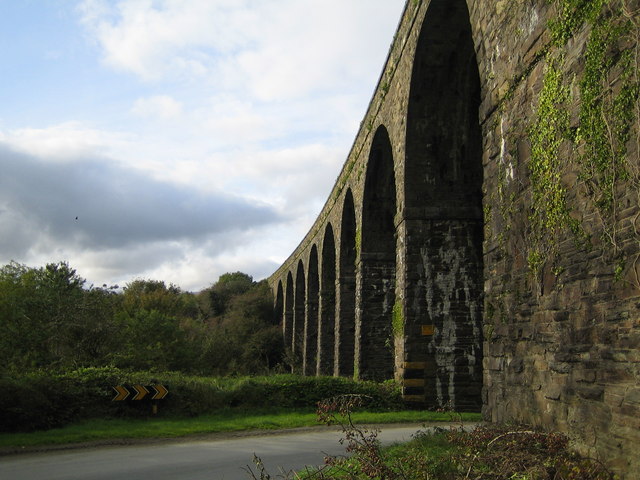 The  Kilmacthomas Viaduct, a majestically curved 8-arched structure, was built along with other bridges for the 1878 arrival of the railway crossing the Mahon Valley, part of the Waterford – Cork line, closed in 1968. (Photo by Nigel Cox)

Flahavan’s Mill has been milling oats for 200 years, supplying breakfast porridge for generations of Irish families.

Famous people from the area include the poets Tadhg Gaelach Ó Súilleabháin (1715-1795) who is buried in Ballylaneen old cemetery; Donncha Rua Mac Conmara, who died in 1810 and is buried in Newtown; and the actor and comedian, Tyrone Power (1797-1841), great-grandfather of the C20th film star, Tyrone Power, and the director Tyrone Guthrie, who lived in Co. Monaghan.

Kilmacthomas is linked by road to Bunmahon on ByRoute 1 and Clonea on ByRoute 3.

Mahon Bridge is a tiny hamlet named for its picturesque bridge over the River Mahon, with a hydroelectric power station just upriver. The village is well known to walkers and hill climbers. The Mahon Falls, aka Coum Mahon, can become very overcrowded at weekends. The best time to visit is after a heavy rainfall, when torrents cascade with immense force down the steep rock face to the pools several hundred feet below. (Photo by markmc)

The “Magic Road” is so called because at a point marked by a stunted “fairy tree” about 500 metres past the cattle grid on the way up to the car park, cars in neutral gear and /or with their engines switched off appear to roll uphill; although some claim that no satisfactory explanation has ever been provided for this phenomenon, it could only be an optical illusion.

The walk up the left hand side of the valley onto Comeragh Mountain (668m) is a hard slog but the views from the top out to Dungarvan Bay and the whole Waterford coast make it well worthwhile.

On the right hand side, the valley is overlooked by Knockaunapeebra (Cnocan an Phiopaire: – “The Hill of the Piper”) (726m), which has two distinctive cairns at the top. There is an excellent panorama of the entire Comeragh plateau from here. Traversing the plateau in any direction involves careful footwork across the infamous Comeragh Bog.

The Coumtay Valley can be approached from the upper car park. There are a number of small lakes at the top of the coum, and a high level circuit can also include a sneaky look down into the Coumalocha in the Nire River Valley, together with lovely views across to Seefin (with it’s unfortunate MMDS hut), Coum Eag (“the Valley of Death”) and the Farbreaga (“False Man”) Horseshoe.

Continuing from the upper car park up the steep hill, the road reaches a point commanding splendid vistas, from the Comeragh Heights of the Mahon River Valley to the east and the Tay River Valley to the west. From here the road winds down the western slope of the hill and through the forest.