Cloyne (Cluain Uamha – “”cave meadow / retreat of the caves”), an attractive village, takes its name from a network of underground passages honeycombing the limestone rock beneath and to the south of its present position. Reputedly used by Roman Catholic priests in the days of the Penal Laws, the caves are nowadays accessible only from the (private) grounds of Cloyne House on Rock Street. 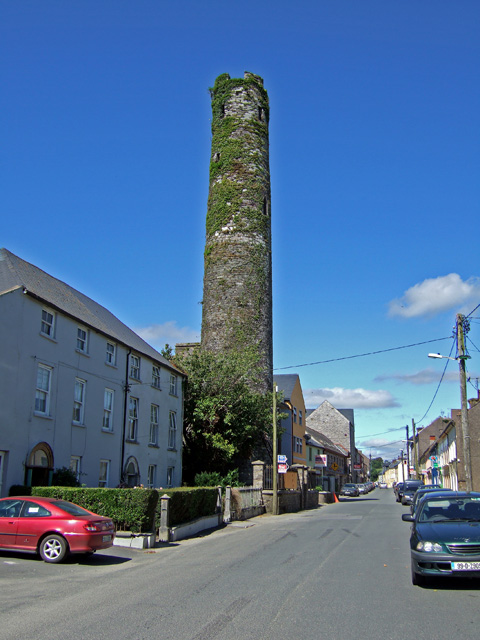 Cloyne is  probably best known for its beautifully preserved C11th Round Tower, one of only two in the county (the other is in Castletown Kinneigh in West Cork). It was struck by lightning on a stormy winter night in January 1794, and the original conical roof was replaced with an embattlement.

The Tower is all that remains of a famous monastery snd centr of learning, originally founded in the C6th AD by the poet- historian Saint Colman mac Lenene and devastated seven times by the Norse and others between 822 AD and 1137.

The saint was made a bishop in 560 AD, and Cloyne has been an  Episcopal See since then.

St Coleman’s Cathedral (CoI) was founded c.1250 on the site of an earlier structure. (Photo by JohnArmagh)

The cruciform edifice has been repaired and altered so much that one description claims it is “totally devoid of any architectural beauty“, but does contain some striking carvings and other attractive features.

The Cathedral was the seat of Bishop George Berkeley (1685 – 1753), the philosopher after whom the well-known Californian University is named (remembered locally for his humility and kindness), and Bishop John Brinkely (1763 — 1835), Ireland‘s first Astronomer Royal.

In addition to the churchyard graves, there are several interesting tombs and memorials inside the church, including a medieval funerary monument to the FitzGeralds of Imokilly. A Bruce Joy sculpture commemorating Berkeley is accompanied by a quote by Alexander Pope.

The Cathedral is now regarded as a parish church in the Anglican Diocese of Cork, Cloyne & Ross. The local congregation is tiny, and most grateful for contributons towards the upkeep of their historic centre of worship.

The Roman Catholic Diocese of Cloyne (the subject of recent child abuse scandals) has its seat in Saint Colman’s Cathedral, Cobh, while the local congregation attend Mass in Saint Colman’s parish church, featuring an attractive peach coloured façade and interior.

The most popularly celebrated son of Cloyne was GAA star Christy Ring, commemorated by a statue in Chapel Street.

Castle Mary was long the seat of the Longfields, one of the leading Anglo-Irish families in East Cork, and the childhood home of naturalist and explorer Cynthia Longfield (1896 – 1991), author of The Dragonflies of the British Isles (1937), who spent her last 36 years living in a small house on the estate.  Near the charming old orchard are the remains of an ancient cairn / cromlech, attributed by some to the Vikings but locally regarded as a “druid altar”, supposedly dedicated to a fairy deity called Mor.

Cloyne, the southern terminus of ByRoute 2, is within easy reach of Shanagarry, Rostellan and Midleton on ByRoute 1.