Mullaghmeen (An Mullach Mín – “smooth summit”) (261m), aka The White Hill, is the highest summit in County Westmeath, the lowest county top and the 1,000th highest land point in Ireland. It shares its name with the surrounding hills and the valley that it overlooks, and commands super views stretching from Lough Sheelin and the other nearby lakes as far as the Wicklow Mountains and the Cuilcaghs / Iron Mountains. 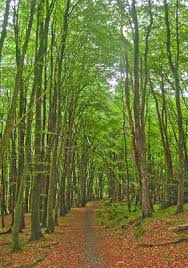 Mullaghmeen Forest, sown on rich limestone soil in 1936 by the Department of Agriculture, is the largest beech plantation in Western Europe, covering just over 1,000 acres  on the Meath / Westmeath border to provide an excellent habitat for a wide range of wildlife, notably songbirds. (Photo – Deja View)

Now run by Coillte, it has picnic facilities and ten miles of well-marked woodland paths taking in an Arboretum of various native Irish tree species, plus remnants of Famine Fields, a Famine Garden, a roofless Booley Hut and flax “retting” pits, all former everyday landmarks engulfed by the forest.

St Hugh’s church (CoI), serving the rural parish of Foyran, is a curious castellated structure, apparently built c. 1843 (although some say it looks much older) but not consecrated until 1876. De-consecrated in 1963, it is now a roofless ruin, but retains its diminutive tower. The nearest village is Finnea. (Photo)

Finea / Finnea (Fiodh an Átha – “wood of the ford” / Feinnaugha– “ford of the hounds”; elsewhere also translated as “words of the lord” or “field surrounded by trees”) (pop. 317), is a small village on the River Inny between its source at Lough Kinale and Lough Sheelin. The district is known for its scenery, fishing and game shooting, which attract many foreign tourists.

Finea was long an important strategic point, control of which was the key to a good portion of South Cavan, as the boglands that lay between Lough Sheelin and Lough Derravaragh formed an otherwise impassable wilderness.

The Battle of Finea was a famous engagement during The Wars of the Three Kingdoms. Surprisingly, the year of this event has been disputed, but the weight of evidence points to 1644.

Owen Roe O’Neill was camped with his Royalist Irish forces near Trim in County Meath, while his Kilkenny Confederacy ally Lord Castlehaven was in Granard, where he learnt that a 17,000 strong  Scottish Covenanter army under General Monroe was  intent on marching from Cavan into Leinster. It was decided that an elite force of “Irish Defenders” would attempt to halt his advance at the bridge – or perhaps ford – at Finea.

The number of soldiers in the force was about 600 foot and 100 cavalry, probably under  Colonel John Butler and Brian Roe O’Neill respectively. They  were in position for one day when Monroe attacked. Although grossly outnumbered, the Irish defended all day long and by evening had almost all been killed. However, Monroe’s losses were also of such horrendous proportions that he retreated through East Cavan and Louth to the Protestant stronghold of Ulster. This allowed O’Neill more time to prepare his forces and was therefore a major factor in his subsequent victories.

The most famous of the “Irish Defenders” was  Myles “the Slasher” O’Reilly, who fought with ferocious bravery and is widely believed to have lost his life in the battle, although said by some to have escaped to France, where he married and had five children. It has been suggested that the name of Myles of Finea fame became confused with that of a cousin who  first emigrated to Spain and then to France and died in the monastery of the Irish Capuchins at Charleville in 1670. Local tradition has it that , having slept in the de Nogent / Nugent castle at Ross overlooking Lough Sheelin on the night before the battle, Myles “the Slasher” returned there to have his wounds attended to and subsequently made his way back to the mid-Cavan stronghold of the O’Reillys where he married and raised his family.

A Celtic Cross monument commemorating Myles “The Slasher” O’Reilly was erected in Finea in 1913 by a joint Dublin & Cavan committee of  politicians, priests and other worthies. The main inscription reads: – “The Slasher had with him 100 horse while the enemy was 1,000 strong. They fought them the whole day long till his followers were nearly all slain. Finally he was encountered by a gigantic Scotchman who trust the point of his sword through the Slasher’s cheek. The latter closed his jaw on the blade and held it as if in an iron vice while he slew his antagonist cutting him through steel helmet down to his chin with one blow, both falling together. At that moment reinforcements arrived from Granard and the Bridge was saved“. A further inscription reads “In memory of Myles O’Reilly, (The Slasher) who fell on the Bridge of Finea while defending against the English and Scottish forces under General Monroe on the 5th August 1646”. (Photo bySarah777)

Thomas Davis‘s ballad The Flower of Finea (c. 1840) is about Eily, a local girl whose man, Fergus O’Farrell, went to fight a war in France in the C17th. Eight years later she travelled to the Continent in search of him only to learn he had been killed, and she became a nun in Ypres for the rest of her life.

Percy French also mentioned the Bridge of Finea in his famous song Come Back Paddy Reilly to Ballyjamesduff. Gore Port was the birthplace / childhood home of  General Sir Mark Walker (1827-1902), who was awarded the Victoria Cross for gallantry during the Crimean War and also fought in the Second Anglo-Chinese War, and his brother, Sir Samuel Walker, 1st Bart (1832-1911) a Liberal politician who favoured Home Rule and a barrister who served as Solicitor General and Attorney General for Ireland, was appointed Lord Chancellor of Ireland in 1892, and has been described as “one of a remarkable group of Irish judges ….. who gave the Irish Court of Appeal, between approximately the years 1890-1910, a reputation for judicial eminence which has probably not been equalled by any other Irish Court“.

Dermot Healy (b. 1947), novelist and playwright, was born locally and describes childhood memories in his autobiography The Bend for Home (1996).

Finea is linked via the R394 with Castlepollard on ByRoute 15.

(The Rock of Curry, an extraordinary limestone outcrop where feral goats leap amongst the crags, is one of several interesting  wildlife habitats in the sparsely populated boglands between Finea and Castlepollard)