Loughcrew / Lough Crew (Loch Craobh – “lake of branches”) is a scenic district with a fascinating history. Slieve na Caillíagh(Sliabh na Cailli – “Hag mountain”) (276m), topped by a Mass Rock from the Penal Laws era, gives its name to a low range of hills. The toponym is thought to have originally referred to an ancient female deity, but is explained in folklore as identifying the place where a giant hag, striding across the land, dropped large stones from her apron. These clusters of rocks dotted around the hillslopes are in fact neolithic monuments. (Photo by Gavigan)

Loughcrew has one of the four most important concentrations of megaliths in Ireland (the others being the Brú na Bóinne in the nearby Boyne Valleyand Carrowkeel and Carrowmore in County Sligo). The Loughcrew monuments were probably erected between 3500 and 3300 BC, making them much older than Stonehenge or the Egyptian pyramids. As with the other Irish sites, very little is known about the people who constructed them.

Traditionally called Cairns, the Loughcrew megaliths comprised mounds covering cruciform chambers with corbelled roofs, of similar design to Newgrange. It is believed that there may once have been well over 50 such erections, of which fewer than half survive, varying in size and stages of decay, distributed over three hilltops. The orthostats and structural stones of the monuments tend to be from local green gritstone, which was soft enough to carve.

While most of the cairns are now open to the elements, many still feature striking examples of Neolithic art  – petroglyphs carved in a unique style, including dots, lines, waves, arcs, leaf and lozenge shapes, cup marks,, fishbone patterns, circles, crescents, whorls, spirals, stars and solar wheels. Although not yet radio-carbon dated, the rock engraving techniques appear to be more primitive than in the Boyne Valley.

Loughcrew was first excavated  by an enthusiastic antiquarian, school inspector Eugene Alfred Conwell, whose findings were published by the RIA in the 1860s, when the Dutch artist du Noyer independently recorded many of the engravings. Great damage was done and numerous artefacts were removed during digs undertaken by amateur archaeologists intent on finding proofs for their crackpot theories (e.g. that one cairn was the tomb of the Biblical prophet Jeremiah, commissioned by God to transport king Zedekiah’s daughter princess Teia Tephi and the Ark of the Covenant from Jerusalem to Ireland  c. 588 BC).

The cairns are usually described as Passage Tombs, but that burial was their true or only purpose remains far from clear. While fragments of charred human bones have certainly been found inside them, along with jewellery, ornaments, tools, cooking implements and so on, there has been nothing unequivocally indicating that the structures were built to contain these items, some of which are undoubtedly of much later origin. Although scientific archaeological exploration has been sporadic to date, some insights have been gained from modern techniques such as aerial photography.

Loughcrew shares mutual visibility with the Hill of Tara, the Brú na Bóinnecomplex, Slieve Gullion in County Armagh and several other megalithic sites. Research carried out by Martin Brennan, an American author of Irish ancestry, first published in 1983 and re-issued in 1996 as The Stones of Time, pointed to the likely importance of astronomy for the builders, and suggested connections between sites tying the Irish landscape together. Just as the Newgrange passage mound is famously aligned to catch the rays of the winter solstice sunrise, it seems that all the passage mounds had orientations to important parts of the solar and lunar cycles, and may have been used in conjunction to foretell equinoxes, solstices, quarter-days and lunar maximum and minimum standstills for both purposes of practical agriculture and / or ritual significance.

Carnbane East is crowned by Cairn T, Loughcrew’s highest and most intact megalithic structure, missing only its capstone (replaced by a grate) and a top layer of quartz.  Aka the Hag’s Cairn, it was identified by Conwell as the Tomb of  Ollamh Fodhla (the legendary first law-giver of Ireland, who according to the Annals of the Four Masters died in 1277 BC and was buried at Tailltean /Telltown). The Hag’s Chair, a huge stone on the northern side of the mound, facing the direction of the pole star, is aka Ollamh Fodhla’s Seat.

At dawn around the time of the Spring and Autumn Equinox a beam of light from the rising sun illuminates the wonderfully decorated backstone of Cairn T, moving from left to right across a series of symbols, thought by some to be a stylised map of the heavens.

Carnbane West features Loughcrew’s largest monument, Cairn D, and the intriguing Cairn L, with seven recesses, reconstructed by the OPW in the 1940s and containing a masive stone basin. Martin Brennan discovered that the free-standing 2m limestone menhir positioned inside the main chamber is illuminated by dawn sunbeams on the cross-quarter days of Imbolc (early February) and Samhain (the early November ancestor of Hallowe’en). The back wall of nearby Cairn H is similarly lit up a few days earlier.

A small car park is linked via a steep footpath up Carnbane East to Cairn T, where there is a Ranger on duty during the summer; the chamber is locked at other times, but keys are available at the nearby Loughcrew Gardens Teashop. The owner of the land on Carnbane West where Cairn L is located does not currently allow public access to the site, but there are plenty of other mounds to explore, many decorated with fascinating carvings, and the summits also command superb panoramic views, said to extend over 17 counties.

Loughcrew was dominated for several centuries by a branch of the powerful Hiberno-Norman Plunket / Plunkett family, whose involvement ion the Kilkenny Confederacy during the Wars of the Three Kindoms led to their downfall and the confiscation of their land.

Saint Oliver Plunket / Plunkett (1629-1681), appointed Roman Catholic Archbishop of Armagh & Primate of All Ireland in 1669, was convicted by a London jury of treason “for promoting the Roman faith”  and hanged, drawn and quartered at Tyburn. His head was taken to Rome and since 1921 has been preserved as a macabre relic in St Peter’s church, Drogheda. He was officially canonised by Pope Paul VI in 1975.

The Loughrew estate was acquired c.1655 by Sir William Petty‘s brother-in-law,William Naper (whose wife’s grandfather, the Dorset-born scion of an old Scottish family, Sir Robert Napier,  had been Chief Baron of the Exchequer in Ireland until suspended for absenteeism and replaced in 1601). William became High Sherriff of Meath in 1671. Like their neighbours, the Taylors of Headfort, also of Cromwellian vintage, generations of Napers built up an extensive estate of some 180,000 acres in north Meath. 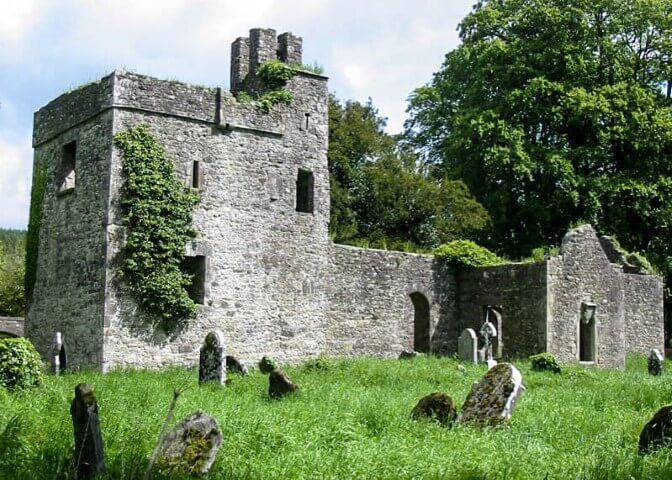 Loughcrew churchincorporates part of the original Plunket family Tower House. This was replaced as the main residence by a C17th Longhouse, of which little remains. (Photo –www.saintoliverplunkett.ie)

Loughcrew House, a Georgian mansion designed by the English architect Charles Cockerell in 1821, suffered a series of fires over the years, reputedly due to a family curse. Following a devastating blaze in 1964, the High Court allowed the family trust to be broken up and the land divided between three sons.

The estate, now reduced to the old walled 200-acre demesne, is farmed by  Charles Naper and his energetic English wife Emily (néeDashwood, of West Wycombe / Hellfire Club fame; her grandmother was married to Randal Plunkettof Saint Oliver’s family), who had the former Orangerie / Palm House rebuilt to a design by the Beirut-born Dublin architect and artist Alfred Cochrane as a an odd but functional eight-bedroom family home.

Cockerell’s vast portico, restored as a ruined “Temple of the Rains,” opens onto woodland walks leading to the eponymous Lough Creeve, famed for its ancientcranóg, and / or up to the famous Loughcrew Megaliths.

Emily Naper and her family have sensitively restored over six acres of garden (C19th, with C17th traces), featuring extensive lawns and terraces, a magnificent herbaceous border and a physic border, rockeries, exotic trees and bushes, a lime avenue, a Victorian walled garden, a Yew Walk, a Rootery, a Hellfire garden, a grotesque grotto, an ornamental canal, a parterre and watermill cascade. A large medieval motte crowned with a wooden Eiffel Tower commands fine views of follies, fountains, symbolic statues / sculptures (many by Ann Meldon Hugh) and whimsical children’s attractions; Alice in Wonderland is a recurrent theme.

The Loughdrew Opera weekend, held in the gardens every summer since 2000, aspires to be Ireland’s version of Glyndebourne, with both performers and audience members wearing period dress.

Emily Naper also has a Studio where  she teaches courses in Gilding & Metal Crafts. Over the years she has provided B&B accommodation and opened her home for spiritual retreats, yoga weekends, etc. A series of Creative Writing workshops  grew into the highly regarded Loughcrew editorial imprint of the Gallery Press, best known for publishing poetry.

The main house and various lodges etc. scattered around the walled demesne are all now available  for self-catering holiday rental. The entire estate was at one stage for sale as a going concern, but was withdrawn due to a lack of satisfactory offers.

The Loughcrew Way is an 8km signposted walking trail linking Oldcastle and the famous Megaliths via a scenic route through the Loughcrew /  Slieve na Calliagh hills.

Knockbrack Grange, aka the Old Rectory, is a charming Georgian house set in beautiful grounds with mature trees and gardens, run as a highly rated Guesthouse / B&B by Kitty Bevan, famed for her cooking!