Edgeworthstown / Mostrim (Meathas Troim – “frontier of the elder tree”) (pop. 1800) is a small town supporting a number of light industries, mainly involving feed for farm animals and pets. The N4 formerly ran along the Main Street, but the town centre was bypassed in 2006. (Photo by Sarah777)

The Edgeworth family, originally from a market town called Edgeworth in Middlesex,  first appeared in Ireland about the year 1585. In 1619 some 600 acres of land confiscated from theO’Farrells at Mostrim were granted to Francis Edgeworth, ancestor of  Richard Edgeworth MP, who built Edgesworthstown House and married Jane Lovell in 1732.

Richard Lovell Edgeworth (1744 – 1817) inherited a ‘tolerably good old-fashioned mansion‘ in 1782 and almost immediately began piecemeal remodelling, enlarging the rooms on the ground floor and linking them by an arcaded loggia, adding windows to admit more light and introducing ingenious inventions such as a central heating system whereby warm air was admitted into the room from above the chimney pieces, sideboards on wheels, leather straps to prevent doors banging, and even a pump in the farmyard which carried water to the cisterns in the house and at the same time dispensed coins to beggars in return for a given time at the handle. He is also credited with inventing the caterpillar track and a machine to measure a plot of land.

As MP for St Johnstown (Longford), he voted against the Act of Union 1800, despite being offered large sums of money to vate in favour. He favoured Catholic Emancipation, and in 1806 became a member of a commission appointed to enquire into the system of national education.

As a landlord, he  reclaimed extensive areas of land and is said to have constantly sought to improve his tenants’ lot, often to his own detriment. He took drastic measures such as doing away with his middlemen, collecting rents himself and eliminating feudal debts and duties.

A founding member of the Royal Irish Academy, he published  a valuable report on the possible reclamation of some 34,500 acres of Irish bog, and produced a treatise on practical education, written originally for the improvement of his own children (who numbered 23 from four marriages!)

Maria Edgeworth, the second child by his first marriage, was born on 1 January 1767 in England. her mother died in 1773, and her father remarried and immediately returned to Edgeworthstown, taking his new wife and children with him. Maria was sent back to school in England, but in 1782 accompanied her father and his third wife to Edgeworthstown and upon his suggestion, began to translate Mme. De Genlis‘s Adele et Theodore. Although shy by nature, she frequently paid visits to Castle Forbes and Pakenham Hall, seats of good examples of the more progressive type of landlord by the standards of that time.

Although she lived through the 1798 Rebellion at home and the American Revolution, the French Revolution and the rise and fall of Napoleon abroad, and travelled extensively, she resembled her contemporary Jane Austen (with whom she shared social connections through the Leigh Perrottand Lefroy families) in that was always most concerned with local affairs, to the extent that she turned down a marriage proposal from the great love of her life, Chevalier Edelcrantz, private secretary to the King of Sweden.

Her first book, published in 1795, was Letters to Literary Ladies, a plea for the education for women. Her masterpieceCastle Rackrent was published anonymously in 180o; it was not until the third edition that Maria mustered the courage to put her name on the book. This novel, in portraying the Irish and the social conditions they endured is very realistic, although the realism is never hostile. Longer novels likeBelinda soon followed. Popular Tales (1812) contained some of her more critically acclaimed work, including Rosanna, while Tales of Fashionable Life, issued in the same year contained The Absentee, a strong indictment of the majority of the landlord class.

Edgeworthstown house witnessed many literary visits, including that of Sir Walter Scott in 1825, who held Maria in high esteem and wished he could attempt for Scotland what she had done for Ireland, and William Wordsworth in 1829, although his Romantic output did not meet with her unqualified approval.

Maria was in her eighties at the time of the Great Famine. Like her father she was untiring in her efforts to improve the lot of the distressed tenants all around her. Some of her admirers in Boston sent a hundred and fifty barrels of flour to her for the poor and starving.

Her brother Francis Beaufort Edgeworth died in 1846, two years after eloping with a teenage Catalonian refugee he met on the steps of the British Museum, and her favourite sister Fannyin 1848, which coupled with attacks of illness, caused her great stress. Having worked to the last, she died on 22 May 1849.

A bronze monument to Maria Edgeworth, sculpted by Mel French in 2005, stands on the town’s Main Street.

Francis Ysidro Edgeworth (1845 – 1926), Maria’s nephew, was a brilliant autodictat mathematician, economist and statistician, Professor of Political Economy at Oxford University, author of Mathematical Psychics (1881) and numerous other works, and editor of The Economic Journal.

Edgeworthstown House was inherited in 1876 by Mrs. CF Mantogue, whose mother was an Edgeworth, and remained in the hands of the family until the 1930s, when it was sold toBernard Noonan, a locally born American construction tycoon, who gave it to the Sisters of Mercy. Certain conditions meant that they could not take possession until 1947, by which time the house, despite previous renovations was in an advanced state of dilapidation. The house was converted into a Nursing Home, involving extensive changes to its interior and gardens, and renamed Our Lady’s Manor.

(Another interesting member of the family was Henry Essex Edgeworth de Firmont (1745 – 1807), the son of Robert Edgeworth, the Church of Ireland rector of Edgeworthstown. His mother was a granddaughter of Archbishop Ussher. When he was about four, his father converted to Roman Catholicism, resigned his living and emigrated to Toulouse. In 1769, after his father’s death, Henry went to Paris to be trained for the priesthood. On taking orders he assumed the additional surname of de Firmont, from the family estate of Firmount near Edgeworthstown. Through his father and the Archbishop of Paris he became vicar-general of the diocese of Paris and friend of the royal family, staying with them during the French Revolution. He is remembered as l’Abbé Edgeworth de Firmont, confessor ofKing Louis XVI).

St John’s church (CoI), built or rebuilt c. 1750, is thought to incorporate the fabric of at least one earlier church; the site is believed to have been used by Saint Beatan to found a monastic community in the C6th AD. The rather squat tower may be of considerable antiquity. The church was enlarged in 1810, hasd its spire (designed by Richard Lovell Edgeworth) lifted into place in 1811, and was further extended c.1889. The interior contains a table presented to Maria Edgeworthby Sir Walter Scott and a memorial to Admiral Sir Francis Beaufort(1774 – 1857), inventor of the Beaufort Wind Scale and a relative of the Edgeworth family. The churchyard encloses the Edgeworth family vault, in which both Maria and her father are interred. Oddly, the graveyard has a memorial to a Roman Catholic Bishop of Ardagh, Dr Thomas O’Beirne(d.1746) and a marker commemorating a circus performer called Lloyd, who died following an accident in 1892. Also buried here is Oscar Wilde’s sister Isola, in whose memory he wrote the poem Requiescat.

Edgeworthstown Markethouse, a fine stone building designed byJames Bell in 1829, is now occupied by a supermarket.

Edgeworthstown railway station, opened in 1855, is on the Dublin–Sligo railway line.

In 2006, the town’s biggest employer, C&D Foods Ltd., was damaged by fire and over half of the factory was destroyed. Production has since recovered. 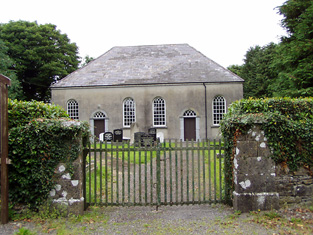 Corboy Presbyterian Meeting House, built in 1729, is the oldest Irish Presbyterian meeting house in continual use outside Ulster, and has the oldest Presbyterian congregation in the midlands. The first meeting house was founded on the site c.1675; the present edifice is thought to have been erected following a large 1729 exodus of co-religionists from all over Ireland to America to escape persecution. It is a highly unusual structure to encounter in this part of the country, being of a type more commonly found in the north of the island. The liturgical centre was originally set to the centre of the back wall, as was the case with many ‘nonconformist’ churches/meeting houses in Ireland during the C18th, including early Roman Catholic churches. The interior was reordered c. 1880, when the eastern stained glass window may have been added. (Photo – www.buildingsofireland.ie)

Corboy House, now derelict, was owned until 2009 by the Phillips family, one of whom, John Phillips (d.1917) was the Nationalist MP for South Longford from 1907 until his death.

Ballyhoolivan is the location of the former Newtownbond Estate, founded by Captain Willoughby Bond, grandson of one of the first Presbyterian ministers at Corboy and himself an elder of the church. An old walled garden has been restored and now features state of the art  field and target archery facilities, while Newtownbond Graveyard is an atmospheric old burial ground containing the ruins of a medieval church.

Ballyhoolivan is south of Moat Farrell and a few miles along tree-lined county roads from Cullyfad in Killoe on ByRoute 16.