The Ben Loughs, located on the upper stretches of the River Boyne north east of Fore, are regarded as mixed fisheries offering both game and coarse angling, but especially pike. Access is difficult, and permission to fish should be sought locally.

The Hill of Ben (215m), situated between Lough Lene, Lough Bane and Lough Glore, is where, according to local legend, Saint Patrick‘s successor Benigne preached to bring the gospel to local communities. (Photo by Jeanne d’Arc)

Fore (Fhobhair – “Spring / source / well“) (pop. 48) is located in a secluded bog valley between the Hill of Ben, the Hill of Houndslow, and the Anchorland rise area. Nowadays a tiny two-pub village, well off the beaten track, it was long a busy fortified town visited by pilgrims from far and wide.

The “Seven Wonders of Fore”

The impressive remains of a once powerful Benedictine abbey, ruins of an earlier church and vestiges of a  medieval mill, nearby Holy Wells and wishing trees, plus an “unusual” modern church combine to create a unique place, ideal for a leisurely visit. (Photo – www.beyondtheblarney.ie)

Saint Feichin founded a monastery here c.630 AD, which had grown to a community of 300 monks by the time of his death from the yellow plague in 665 AD, and at one stage had more than 2,000 students.

The monastery would have required considerable infrastructure, such as accommodation and study areas, cooking and dining facilities, and a farm to feed the community. There would also have been intellectual trade – visitors from other monasteries, chieftains seeking counsel, and monks leaving the monastery to spread the word.

A Benedictine Priory was established c.1185 by Hugh de Lacy, who installed monks from Evreux, Normandy; the monastery was dedicated to both Saint Feichin and Saint Taurin / Taurinus (d.c.410 AD), the legendary patron of the parent house.

The French affiliation caused the monastery to come under suspicion during the reign of King Edward I and be confiscated by King Edward III in 1340, not long after the start of first phase of the Hundred Years War. The Cloister (Photo by SarniaGirl)

The complex is believed to have started falling into ruin in the early C15th. Many of the buildings that remain today date from the 1430s, when some parts were re-built.

The last Prior was William Nugent, who surrendered the site to King Henry VIII in 1539, and was rewarded with a life pension. Crown troops pillaged the Abbey and took anything of value.

St. Fechin’s church was probably built around 900AD, almost certainly on an earlier structure. The west doorway features a lintel decorated with a Greek cross; it weighs about 7 tons, and was said to have been raised into position by the strength of St Feichin prayers. A Sheela-na-Gig is carved inside the church. Around 1200 a chancel was added and an archway leading to this was re-erected in 1934.

The C13th church still has some decorations and graceful arcaded cloisters. Attached to the church are the broken walls of two towers, where the monks once lived.

The Columbarium / Dovecote towards the north east of the abbey is a a circular building originally standing about six to eight feet high, with a circular wooden roof that was used to house doves.

Doaghfeighin (“Feichin’s vat / keene“) is a box-like structure built of four large stones, which may have originally been a megalithic tomb (there are a number of bronze age cist graves in this vicinity). The vat was once filled with water, and Saint Feichin is said to have knelt in it to pray.

The vat is beneath an ash used by locals as a wishing / rag tree. An adjacent shrivelled stump studded with coins is all that remains of an older tree, probably killed by metal poisoning. Ash trees mark holy sites all over Ireland.

St Feichin’s Well is a natural water spring at Tobarnacogarny near the old church. According to legend, anyone who attempts to boil water from the holy well will die soon afterwards.

Saint Féichín allegedly built a mill and then commanded a stream to appear and flow through it. Given that he and his followers were in a spot full of natural springs, where a stream still flows long after the mill’s demise (there was still one in use here as late as 1875), a logical explanation is of course out the question.

The “Seven Wonders of Fore” are the supposed miracles attributed to Saint Fechin:

1) Monastery built on a bog,

3) Tree that won’t burn – refers either to the wishing tree or to 3 branches that represent the Holy Trinity,

4) Water that won’t boil – refers to the legend of St Fechin’s Well,

5) Anchorite in a stone – refers to the Hermits who occupied the Anchorite’s cell,

6) Water flows uphill – refers to an underground stream which appears to flow uphill from Fore into Lough Lene on the other side of Fore Hill.

7) Stone raised by St Fechin’s prayers – refers to the lintel stone above the doorway of St. Fechin’s church. The fortified C15th East Gate, one of the two gateways to the medieval complex to be seen in the surrounding fields. (Photo by RETRO STU)

The  Greville Nugent Mausoleum, aka the Anchorite’s chapel, is a small stone Tower House (c.1500), inside which a plaque commemorates Patrick Beglan, the last hermit in Ireland, who lived here until 1616. Set back from road on side of a steep hill overlooking Fore Abbey to the west, the edifice was used as a mausoleum by the Nugent family from 1680 and considerably altered in 1867 by George Ashlin (1837-1921) with extensive Gothic detailing for ceremonial effect. The interesting collection of finely carved memorial monuments to the interior is of historic and artistic merit.

The Fore Crosses are approximately 18 crosses, one in the village of Fore and the rest scattered across fields and roadways within a 10km radius, along the old pilgrim trails leading to the Abbey. Some are plain (most likely due to wind and rain erosion) while others retain their carvings. Most have been badly neglected and a number are missing. 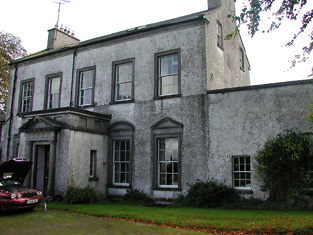 Lough Park House, built by the Pollard family c. 1790 as a Dower house, in an unusual variation on the neo-classical country style, is beautifully set in extensive grounds on the far western shore of Lough Lene.