Bective (Beigthigh), historically sometimes aka Bective Bridge or Ballina, is a small hamlet and townland on the River Boyne.

Bective Abbey is nowadays a martial-looking ruin in the middle of a farmer’s pasture beside the River Boyne.

Founded by Murchad O’Maeil-Sheachlainn in 1147 for the Cistercian Order as the first daughter house of Mellifont Abbey, it was rebuilt and heavily fortified in the C15th, when the massive tower and the impressive cloister were added.

Alterations over the centuries made the complex a veritable warren, so that exploring the ruins involves walking down blind passages, descending into souterrains and going up staircases that stop in thin air (the more dangerous parts are securely out of bounds).

Bective Abbey was used as a location during the 1994 filming of Mel Gibson’s ahistorical Braveheart.

Bective was home to the writer Mary Lavin, whose family moved to Abbey Farm in 1925. One of her books was Tales from Bective Bridge (1943).

Dunderry Park, a 200-year-old Georgian house with a small estate, is run by the Oaktree Charitable Trust as recuperation centre  for people who have suffered traumas.

Dunderry Lodge is a famous restaurant, still basking in the glory of a Michelin star won and lost over 20 years ago.

The Black church, in a nearby rural location variously identified as  Meadstown / Rataine / Retaine, is now a solitary but atmospheric gable wall presiding over an almost overgrown old cemetery partially enclosed by thick woods. (Photo here)

Ráth Cairn / Ráth Chairn / Rathcarne / Rathcarran is a small Gaeltacht (Irish Gaelic speaking) district, founded in 1935 when some 50 families (443 people) from Connemara were settled on land previously acquired by the Land Commission. Each family was provided with a house and small farm, pigs and basic implements.  A similar settlement at Baile Ailin / Allenstown proved less successful, with most of its inhabitants moving away.

Since 1967, Ráth Cairn and the nearby community of Baile Ghib / Gibbstown have  constituted the Meath Gaeltacht. Residential Irish language courses are run for teenagers in the summer months. 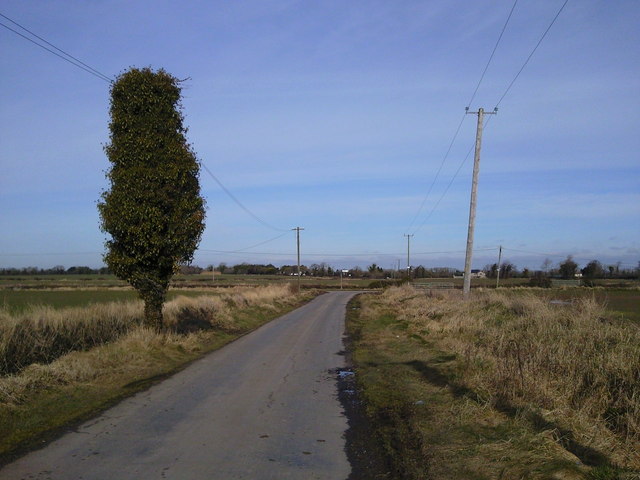 Country road in the Fidorfe district. (Photo by C O’Flanagan)

Rathmore church is a small medieval nave and chancel church with an imposing tower, all that is left of Rathmore Abbey. The ruin features a good east window, a reconstructed sedilia with a fine fan-vaulted ceiling, and a double effigy tomb of a knight and his lady, probably Sir Thomas Plunkett (d.1471) and Mary Cruise. Carved fragments on display include a slab depicting a maze and the decorated shaft of a baptismal font. The churchyard contains part of an early C17th memorial cross with figure carving.

Nearby stand the remnants of Rathmore Castle, former seat of the Plunkett family and later the Bligh family.

The Hill of Ward / Tlachtga

The Hill of Ward (116m), a local landmark, got its English name from a landowner who was evicted during the Cromwellian redistribution, when the land was given to a Roundhead soldier.

The hill is aka Tlachtga, a reference to an Iron Age rath dating from c.200 AD, said to be named after a  sorceress who died there giving birth to triplets. The hill also featured in stories of Tlachtga’s father Mug Ruith, a druid who was said to have ridden his  roth rámach flying machine over it.  The ringfort was much disturbed by C17th use as a fortified camp.

The hill was associated with an aonach / sacred fair held every three years at the beginning of November, the Celtic feast of Samhain,  precursor of modern day Halloween. The old year’s fires were extinguished and, after sunset, the ceremonial New Year Samhain fire was lit here. Torches were lit from this sacred fire and carried to seven other hills around the county including Tara and Loughcrew, and then on to light up the whole countryside. The last recorded fair was in 1168, a massive assemblage presided by Ruaidrí Ua Conchobair / Rory O’ Connor, the last High King of Ireland.

The old Celtic celebration at Tlachtga has been revived, starting with a popular torchlit procession from the Fair Green in Athboy to the top of the Hill on 31st October  each year.

Athboy (Baile Átha Buídhe – “Town of the Yellow Ford”) (pop. 8000) straddles the Yellow Ford River in wooded country near the County Westmeath border. Although not particularly photogenic, the town has an interesting history, several hotels and other accommodation options and a number of  good pubs.

Athboy began as a C6th settlement at the river crossing known as Äth Buí / the Yellow Ford, where a network of routes had converged from earliest times.

In 1180 the Anglo-Normans built a castle and founded the town within a walled square beside the river. Their original layout was altered when the first bridge was built c. 1400.  The river beneath the bridge was later diverted to accommodate the operation of the water wheel for the nearby cornmill.

By 1407 the small walled town guarding the edge of the Pale was sufficiently important to be granted a Royal Charter by King Henry IV, but was destroyed by a great fire in 1442 and took several years to rebuild. Medieval Athboy was dominated by a branch of the Plunkett family, who intermarried with the Cruise family.

A Carmelites Priory, established in Athboy shortly after the Order came to Ireland c.1260, was the venue for Provincial Chapters held in 1325 and 1467. The dissolved monastery was granted to Thomas Casey in 1543, and later turned into a horse mill.

The Wars of the Three Kingdoms saw Owen Roe O’Neill take Athboy in 1643, and six years later Oliver Cromwell camped his army on the Hill of Ward nearby.

John Bligh, a member of an old Devon family, acquired large estates in the Athboy area. In 1694, the town’s ‘lands and commons’ were granted to Thomas Bligh (1654 – 1710), MP for Athboy. In 1725 his son, John Bligh (1687 – 1728) was created Earl of Darnley in the peerage of Ireland, resurrecting an old Scottish title long held by ancestors of his English wife Theodosia (née Hyde), 10th Baroness Clifton. The Earl’s brother Thomas, a British General, represented Athboy in the Irish House of Commons for over 60 years.

Edward Bligh (1715 – 1747), 2nd Earl of Darnley, inherited the title Baron Clifton from his mother, thus acquiring a hereditary seat in the British House of Lords. A Grand Master of Freemasons and a Fellow of the Royal Society, he was made a Lord of the Bedchamber to Frederick, Prince of Wales. He never married, but seems to have been the lover of the popular Irish actress Margaret Woffington. He died at the family’s English seat, Cobham Hall in Kent, and was buried at Westminster Abbey. His titles passed to his brother John (1719 – 1781).

The Bligh family, as principal landlords of Athboy for over 200 years, planned and carried out the development of the town to give it the form it has now. By the late C19th they owned some 10,000 hectares of land, the largest estate in County Meath.

St James church (CoI), erected in 1772, incorporates a  C14th tower from the old Carmelite Priory. Part of the medieval town walls survive in the church grounds, as does an interesting table tomb.

Athboy’s public library stands on the site of a gate lodge formerly used as a residence for the Anglican church sexton. (Photo – www.librarybuildings.ie)

St James church (RC) was completed in 1845. The church grounds contain a statue of Fr. Eugene O¹Growney, one of the founders of the Gaelic League, sculpted by Seamus de Paor and unveiled by President Sean O¹Kelly in 1956.

The Market House, now a bridal boutique, was long the venue for a weekly market of farm produce, including wool.

The Macra na Feirme Hall, used as a courthouse until 1964, was built in 1863 as part of a complex occupied by the RIC, which included a jail and a barracks (now the Bank of Ireland). Every June Bank Holiday, the youth club hosts the Blue Jean Country Queen Festival.

The Mall was where soup was prepared in a huge pot and distributed to victims of the Great Famine.

The Metal Footbridge crosses the Yellow Ford where the original street of Athboy crossed the river leading to the Fair Green and the Hill of Ward.

The Fair Green, probably the site of sporting contests in ancient times, was donated to the people of Athboy by Lord Darnley in 1910, used as a site for the monthly cattle fairs until these were discontinued in 1955, and developed as a public park in 1999. (Photo – www.meathchronicle.ie)

Athboy railway station opened in 1864 on the Athboy – Dublin line run initially by the Midland & Great Western Rwy Co., whose locomotives were painted emerald green with vermillion coloured nameplates. The station, which suffered severe damage from a bomb blast during the Civil War in 1923, was closed to passengers in 1947, and freight traffic ended in 1954. The fine stone buildings visible today are dominated by the former Engine House.

Frankville House is a fine C18th country house on the edge of town, run by the Geraghty family as a charming guesthouse and quality restaurant.

The Old Darnley Lodge Hotel on Main Street, built in the C19th by the Bligh family, was occasionally used by them as a place to stay when visiting from England, and housed the Darnley estate office until 1948.

The Athboy Farmers’ Market is held every Sunday morning in the old Athboy Lodge stables & yard on the former Dyas estate, home of Manifesto, the horse who famously ran the  Aintree Grand National more times than any other, competed in eight renewals of the event between 1895 and 1904, and was the first to win the race twice, in 1897 and 1899. The conversion of the site by the local community was the subject of RTÉ‘s Dirty Old Towns show on 4th May 2011.