Dunsany / Dunsany Cross is a crossroads hamlet in the townland of Dunsany, which forms part of the Roman Catholic parish of Dunsany & Kilmessan.

Dunsany Castle and Killeen Castle were both commissioned shortly after the C12th Norman invasion by Hugh de Lacy to guard either side of the main road connnecting Dublin to the North. Both were held (initially on behalf of the de Lacys) by the Cusack family until 1399, when heiress Joan Cusack married Sir Christopher Plunkett of Rathregan, who became 1st Baron Killeen and died in 1445. They divided the single vast estate by leaving Killeen to their eldest son (ancestor of the Earls of Fingall) and Dunsany to his younger brother, Sir Christopher Plunkett (b. 1410), who became 1st Baron of Dunsany, and died in 1463.

Dunsany Castle, inherited in 2011 by Randall Plunkett (b.1983), 21st Baron of Dunsany, is thought to be Ireland’s oldest home in continuous occupation. (Photo – www.tourismresources.ie)

Dunsany Castle was probably built c. 1180 in succession to a basic motte & bailey fortification, remnants of which can still be seen nearby. Surviving parts of the C12th building include the foundations, the lower parts of the four main towers and some interior spaces, notably an old kitchen, but the current castle is more than three times the size of the original.

The Barons of Dunsany had sporadic problems with the English authorities, especially under Oliver Cromwell (the then Lady Dunsany defended the castle against an initial approach but the family were later forced out, some dying on the way to Connaught), and during the Williamite War (the 11th Baron, a follower of King James II, was outlawed after England’s Glorious Revolution, but had his lands restored by the Treaty of Limerick). Despite being cousins of Saint Oliver Plunkett, executed in London in 1681 and regarded as Ireland’s greatest Roman Catholic martyr, the 12th Baron and his successors conformed to the Church of Ireland to preserve the estate.

Sir Horace Curzon Plunkett (1854 – 1932), having worked as a rancher in Wyoming for ten years, became  a key figure in the Irish Co-Operative movement and an Irish Unionist Alliance MP in favour of Home Rule, whose South County Dublin house was torched by the IRA in 1923. His nephew, the 18th Lord Dunsany (d.1957), was a poet, playwright and author, nowadays best remembered for his novel The King of Elfland’s Daughter, and his short stories in the field of fantasy, the Jorkens tales, which greatly influenced HP Lovecraft. His brother, an Admiral in the Royal Navy, used their mother’s surname Drax. The 20th Baron, Edward John Carlos Plunkett (1939 – 2011), was a highly regarded artist.

The Castle has impressive hallways and stairs, a grand dining room, a fine arts and crafts billiards room, extensive kitchens, ornate bedrooms and drawing rooms, and a splendid library in the Gothic Revival style, with a “beehive” ceiling. A “priest’s hole” for hiding fugitive Roman Catholic clerics formerly existed.

The castle is still surrounded by its original demesne enclosed within  a drystone wall built as relief work during the Great Famine. The lands comprise a mix of farmland, marsh and woodland.

The church of St. Nicholas (of Myra), known locally as “the Abbey”, was built c.1445 on the site of an earlier church (standing in 1305). It is now a National Monument, with remnants of lofts and living quarters, and inside and around are tombs of family members and local residents. While it fell out of use and a new church was built at Dunsany Cross, it is still consecrated.

A large  walled garden still produces fruit and vegetables for the estate. A cottage, historically occupied by the senior gardener, is built into the walls of the garden. Nearby are working beehives. Also within the demesne are stone-built farm and stable yards, an ice-house and wells.

The current main entrance, opposite theDunsany Cross, a medieval pilgrimage monument, is a mock Gothic ruin concealing a gatehouse”; nearby is the former Steward’s House, a curious sunken structure. The former main gateway has a tower lodge and high white gates.  A third gateway at Dunsany Bridge, over the River Skane, had a curious black-stone lodge that was vandalised in the 1980s.

The castle and demesne have been used for filming on occasions, e.g. for Braveheart (the wedding scene was filmed in the church of St. Nicholas) and the remake of The Magnificent Ambersons.

The castle can be visited on a certain number of days each year, for a fee. 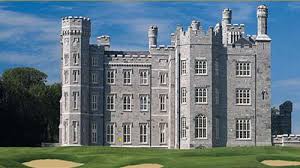 Killeen Castle is a restored C19th mansion. The original Killeen Castle was built by Geoffrey de Cusack around 1181. The date is carved above the doorway.

The first Plunkett to hold the castle, Sir Christopher, became the 1st Baron Killeen, and the title was passed down through his eldest son. The 10th Baron, Luke Plunkett, was created Earl of Fingall in 1628. In 1831 the 8th Earl, Arthur James Plunkett, was created Baron Fingall in the peerage of the United Kingdom, giving the family a hereditary seat in the British House of Lords. The  dynasty were the premier Roman Catholic peers of Ireland until all three titles became extinct on the death of the 12th Earl in 1984.

The two branches of the original family remained close over the centuries, and the Dunsany branch, having survived transportation to Connacht under Cromwell and other difficulties, and converted to the Church of Ireland, held Killeen in trust during the worst of the Penal Law period for their Roman Catholic cousins. Unlike some arrangements of this sort, Killeen was formally returned.

Having fallen into disrepair in the late C17th, the castle was leased out, and was not restored until around 1779, when parts of the demesne were landscaped and some of the estate features were added. Significant reworking was carried out from 1803 to 1813 under the supervision of Francis Johnston, and in 1841 the 9th Earl had the edifice demolished and rebuilt by James Shiel in a style reminiscent of a miniature Windsor Castle.

In 1951 the 12th and last Earl of Fingall sold the property to Sir Victor Sassoon, but stayed on as manager of the stud farm established near the castle. Sassoon died in 1961 and his heirs sold the estate to French art dealer and racehorse owner Daniel Wildenstein. In 1978, the castle and estate were sold to advertiser Basil Brindley, who continued the stud farm operation. On 16 May 1981, the castle was burnt out in an arson attack, and was left abandoned until purchased in 1989 by Christopher Slattery, who initiated the current development plans.

The church of the Nativity of the Blessed Virgin Mary, erected c.1425 in the castle grounds, is preserved as a National Monument, sometimes inaccurately called “Killeen Abbey”. The demesne also contains a substantial stable yard, a walled garden, seven lakes stocked with trout, a Holy Well and other features . A golf course has been added.

In August 2006 it was announced that Killeen Castle would open in 2009 as a 179 room luxury golf resort and spa hotel. Although the plans were scaled down following a downturn in the tourism and leisure industry, the Killeen Castle Hotel opened for business as a golfing and fishing destination.

Kilmessan (Cill Mheasáin – “Church of Messan”) was from 1862 the location of a train station on the Dublin & Meath Railway Co.’s line. Travellers to Trim or Athboy change at Kilmessan on the Dublin/Navan line to board a local line.

A train used to leave Broadstone, Dublin at 10am on Sunday mornings carrying anglers, shooting enthusiasts  and sightseers to Kilmessan or beyond. The anglers made their way to the Boyne River, while the shooting gentry and their hounds frequented the nearby hunting grounds. The sightseers, who usually travelled in large numbers during the summer, went to the Hill of Tara.

The Station was burned in 1922 during the Civil War and all telegraph poles between Drumree and Kilmessan were cut.

The last passenger train ran in December 1947, and Kilmessan junction was reduced in status to a “Halt”. The Railway remained open until 1963 for freight traffic, mainly carrying cement and livestock.

A proposal to (re-)open a station at Kilmessan on the new Dublin-Navan commuter train line, originally planned for 2015, appears to have got bogged down.