ByRoute 15 links the M3 Junction 6 near DUBLIN with Ballycastle and Killala (Co. Mayo).

Dunshaughlin was long known locally / historically / ecclesiastically as Domhnach Seachnaill –“Seachnall’s church”, after a C5th monastic settlement founded by Saint Sechnall / Seachnall / Secundinus, traditionally regarded as a friend / disciple of Saint Patrick and one of the first bishops of Armagh.

(Nowadays the saint is thought more likely to have been a separate missionary. Some scholars have suggested that Secundinus was one of three Italian bishops who arrived in Ireland in 439 AD to assist Palladius, whose mission had begun in 431 AD and who was known in Ireland as Patricius, leading to confusion with the slightly later Saint Patrick).

(Secundinus was left in charge of the Irish Church for several years, and is said to have died c. 448 AD, aged 75, the first Christian bishop to die on Irish soil. According to medieval records of dubious veracity, he wrote the first Christian Latin hymn composed in Ireland, a song in honour of Saint Patrick).

Six hundred years later, the church was burnt to the ground and, by 1152, the Diocese of Dunshaughlin was suppressed; it later became part of the new Diocese of Meath.

St Seachnall’s church (CoI), an early C19th edifice (1814) with unusually large stained glass windows, stands on the site of the ancient foundation. A  baptismal font of medieval origin is still in use. A medieval church arch stands in the grounds, along with a few C15th / C16th architectural fragments. The most interesting item is a slab bearing a carved figure of the crucified Christ between two soldiers, in a style similar to that found on many High Crosses. Believed to date anywhere from the C8th to the C12th, it probably formed the lintel over the doorway of an even older church. (Photo – www.geocaching.com)

The old arch marks the burial site of two Rev. Irvines, pére et fils, who served as Rectors of Dunshaughlin from 1788 to 1839.

The current Papal Nuncio to Madagascar and Apostolic Delegate in La Réunion and the Comoros Island, Monsignor Eugene Nugent, is the titular Roman Catholic Archbishop of Domnach Sechnaill.

The Wars of the Three Kingdoms saw a puritans attack on villagers taking in the harvest in Bonestown in 1642. The terrified peasants took refuge in the old church at Trevet, which was set on fire, and those who escaped were killed with arrows. The ruins of the church and an overgrown graveyard beside it can still be seen.

Gallow’s Hill was so named after the 1798 Rebellion, when “Croppies” raided the local barracks and went into the manor, murdered the residents and looted it for weapons, even using the legs of chairs. 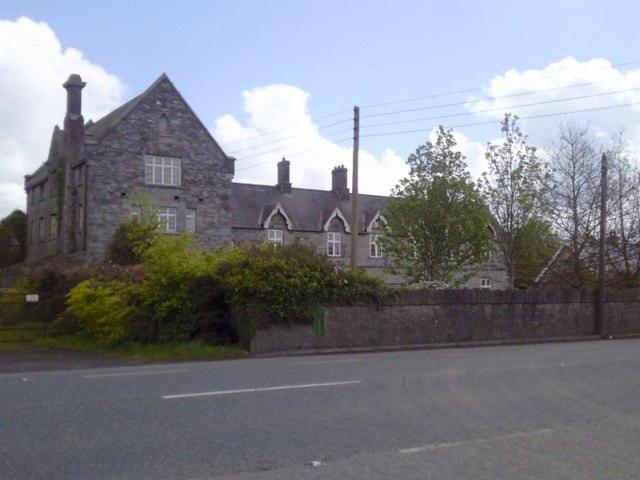 The Dunshaughlin Union Workhouse was erected in 1840-41, and survives to the present day with its original appearance. It was largely a self-contained institution run by Guardians who worked hard to ensure that 400+ inmates and staff were treated fairly and were well looked after in the context of the time. (Photo by C O’Flanagan)

Measures to increase capacity and provide medical services just about coped with the distress and disease of the Great Famine years. In matters of tenant rights the Guardians were progressive and ahead of their time.

In the post-famine years, the workhouse rarely had more than a few dozen inmates. The building was used during WWI to accommodate Belgian refugees, some of whom died there and were buried in the paupers’ graveyard, and was taken over as a barracks by the Black & Tans during the War of Independence.

Memorial services are sometimes conducted in the burial ground behind the workhouse, which can still be visited. The building itself is now under private ownership, and has been converted into the Old Workhouse B&B.

St Patrick’s church, replaced in 1983 as a place of worship by a modern edifice of the same name (RC), is a handsome mid-C19th building, now used to house a public library. Beside the entrance is a huge old iron cauldron from a local soup kitchen set up during the Great  Famine.