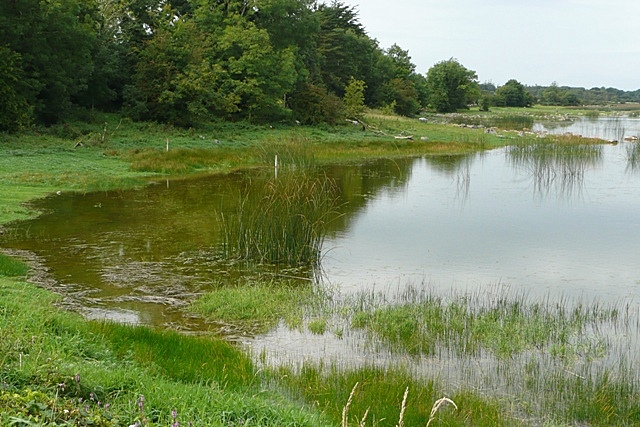 Lough Funshinagh / Loch Fuinseann (“lake of the ash”) is a turlough or “disappearing lake”, vanishing about two or three times every ten years. Fed by springs and surrounded by pasture land, it has a few islands off the eastern shore, long famous among ornithologists as the home of the only breeding colony of Black-necked Grebes in Ireland, and isa wildlife sanctuary for native birds, wintering migrants and a wide variety of plant life. (Photo – Graham Horn)

Longfield House, originally called Gortnacassah Castle, is a ruined Tower House situated near Kilmeas. It was owned in 1642 by the Coyle family, who reportedly got into a skirmish with Sir Charles Coote but somehow managed to evade the order from Oliver Cromwell to demolish all the superfluous castles in the vicinity of Athlone. The property passed by marriage to one Mr. Dodwell, who sold it in 1675 to John Sproule, a captain in the Highland Regiment who lived near Castledaly. In 1824 his descendant James Sproule moved into Athlone.

Dysart (An Dísirt – “the wilderness”), historically known as Thomas Street, is a small crossroads village with two pubs. The  toponym Dísert is common all over Ireland, and usually indicates an ancient hermitage.

Dysart / Commeen church appears to be of C12th origin, with many subsequent alterations and additions, some probably dating from when it was adapted for Anglican use. Long in ruins, it is surrounded by mainly Church of Ireland family  graves.

The Commeen / O’Connor Cross, erected in 1639 as a wayside marker for pilgrims visiting the church, bears curious symbols.

Ballyforan is the location of a splendid stone bridge spanning the River Suck. (Photo by Graham Horn)

Mount Talbot, historically aka Tessaragh / Tisrara and previously known as Cluain na Gclai, was renamed in 1656 upon acquisition by Sir Henry Talbot, a member of a junior branch of the Talbot family of Malahide Castle, who had hoped to purchase real estate locally before the Wars of the Three Kingdoms, only to find himself forcibly relocated as part of the Cromwellian redistribution, while the members of the O’Kelly clan who had previously occupied the land were dispossessed entirely.

The Talbot family switched religious denomination after the 1691 Treaty of Limerick in order to hold onto their property, and remained until 1921.

Mount Talbot House, erected in 1749, was built in the Palladian style, with the wings set at 45 degrees and joined by curved open arcades.to the centre bloc, which was remodelled c.1820 by William Talbot in an impressive Gothic style, with a massive square tower at one end, a pair of turrets in the centre and a third turret at the other end.

John Talbot married Marianne McCausland in 1845; they were divorced by an Act of Parliament in 1856. Their son William John Talbot inherited extensive estates, enabling him and his wife to live opulently during the late Victorian and Edwardian eras, owning the first car in County Roscommon.

The Troubles caused extensive damage to local property in 1922, when Mount Talbot House was burned along with several other buildings on the estate, including a nursery business that brothers John and James Galvin had established in the grounds in the 1890s. In 1928 the property was sold to the Land Commission and resold to MJ Kelly of Ballygar for £1300.

Mount Talbot House is now a poorly preserved ruin. Much of it has collapsed, and piles of masonry have been covered by vegetation, though there are still signs of impressive archways and stains from the 1922 fire damage are still visible. Remarkably, it was only registered as a protected structure in 2007, after it was discovered that stones from the house were being sold off. Photographs of the ruin can be seen here.

Mount Talbot church (CoI), built in 1766, is now derelict and falling into ruin, but retains its impressive tower, crypt, carved grave markers and Talbot family mausoleum in an atmospheric setting enhanced by the finely-executed stone gate piers. A small conservation grant was made available recently.

Bushypark House, built c.1720, is a splendid early Irish Georgian country house, used over the years as a school for the sons of Anglican clergymen and as a home for a branch of the ffrench family.

The Suck Valley Way is a circular walking route running up the west side of the River Suck from near Mount Talbot to the outskirts of Castlerea and returning down the east side, taking in ‘The Nine Friendly Villages’: Ballygar, Creggs, Glinsk, Ballymoe, Ballintubber, Dunamon, Castlecoote, Athleague and Mount Talbot. (Photo – www.ireland.com)

Typical river valley bogs, callows, woods and unspoilt traditional farmland of many tiny fields make for wonderful and varied low-land walking, with a pleasant mix of cross-country paths through fields and woods, quiet side roads and stretches of riverbank. As is common with countryside that has not been agriculturally over-developed, there is a rich heritage of the remains of monuments and buildings of the past to be enjoyed along the route, including ringforts, castles, ancient churches, and ruined castles.

The Suck Valley Way, a booklet by Joss Lynam, is available free from the Suck Valley Angling Centre in Athleague. The route can be subject to flooding, worth checking locally.

The Suck Valley Walking Festival is held in early  September every year.

Mount Talbot is linked by the N63 with Athleague on ByRoute 15.