Raharney (Ráth Fhearna – “Fearna / Aharny’s ringfort”) (pop. 240) is the most easterly settlement in County Westmeath, on the edge of bogland bordering modern County Meath. It is nowadays best known for its GAA hurlers.

The village owes its existence to an ancient ford across the River Deel, a tributary of the River Boyne, lying eastwards of three major lakes and on as many as three difficult routes across the midlands. A bridge now spans the river, and Raharney likes to be known as Home of the Weirs.

St Brigid’s church (RC), a prominent edifice built c.1834 as a chapel of ease for the church at Killucan and renovated in 1860, has a freestanding cast-iron belfry typical of the immediate post-Emancipation period, and a stained glass window “erected to the glory of God by the Raharney Rovers, New York“.

Kilcolum, perched on top of a small hill on the bend of the river, is the site of a ruined church with a cemetery. One of the graves contains the remains of Fr Swords (d. 1821), a former parish priest to whom many cures have been attributed.

Grangemore Estate is said to have the largest demesne in Ireland. 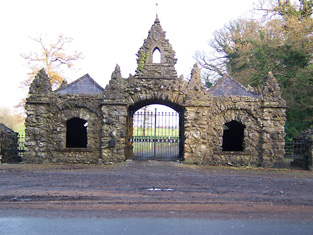 Gatehouse (1821) of Bracklyn House (c.1790), north of Raharney, built on the site of a C15th Tower House by a branch of the Featherstone-Haugh family, important landlords with properties throughout the region. The grounds also contain an eccentric polygonal mausoleum. (Photo – www.buildingsofireland.ie)

Killucan and Rathwire, neighbouring villages set in gentle, rolling countryside, grew considerably during the Celtic Tiger years, with a combined population in 2006 of almost 1,250, the majority of whom commute to work in DUBLIN or nearby Mullingar, while rural inhabitants of the area engage in mixed farming and quarrying.

Killucan (Cill Lucaine – “church of Lucaine / Lucan”) is thought to derive its name from a C6th abbot who established a local monastic community, no trace of which remains today. Some believe that Lucaine is a corruption of Etchen, the bishop who founded the nearby Clonfad monastery.

St Etchen’s church (CoI), a handsome neo-Gothic building with a fine steeple, was erected in 1802 / 1813 on the monastic site, occupied in the late C12th by a Norman edifice dedicated to Saint Margaret, of which the small portion still visible in the grounds probably dates from the C15th. Some of the tombstones in the grounds (and nearby) are very old indeed, with some possibly dating from the Crusades. (Photo – B.T. Photos)

Local folk memory recalls a massacre of monks here by Cromwellian soldiers after the slaughter of many of Drogheda‘s inhabitants in September 1649.

Inside the church a C13th baptismal font is still in use, and a beautiful stained glass window by Sarah Purser can be admired, along with liturgical furnishings presented by the Vandeleur and D’Arcy families. The vault beneath the church contains the remains of several members of the Packenham family.

The Battle of Killucan, fought on 10th May 1414, is recorded in the Annals of the Four Masters as a victory for Murrough / Maurice O’Conor of Offaly, aided by the MacGeoghegans, over “the forces of the English Pale”, of whom Sir Thomas Mereward, Baron of Screen, and “a great many officers and common soldiers were slain”, while hefty ransoms were paid for Chriostopher Fleming, son of the Baron of Slane, and the “ubiquitous” Sir Jenico d’Artois.

Three wayside crosses stand in a grove just outside Killucan. The oldest, moved here from beside the Dublin – Athlone road, commemorates “Tir: McKin: [Tirlogh McKenny] and Alson Pluncket, his wife in the year 1531“, killed in a coaching accident. The only cross standing in its original position recalls  “John O McLaghlin and his wife Jovan Hughes”, killed by a runaway horse in 1601. The other cross, formerly in the centre of the village, reads “Arthur Darcy et K. Fitzgerald me feri na Dni 1604” followed by text from the Service for the Dead; this may be a headstone for a baby’s grave. 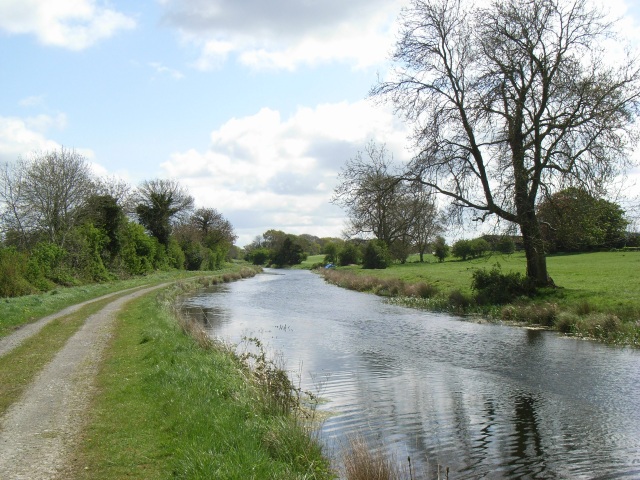 The Royal Canal reached Killucan from Dublin in 1805; used to transport people and goods throughout the C19th, it fell into a slow decline with the advent of rail and road travel. Abandoned for many years, it has been restored for leisure boats, and provides an excellent local amenity for walking, boating, canoeing etc. The Killucan Flight is a 2 km stretch of eight locks; there are none to the East for 27km or to the west before Mullingar, the highest point on the Canal. (Photo by JP) Killucan’s Market House is a splendid stone building, was constructed c.1838 by order ofº the Earl of Longford, and was long used as a venue for trade in agricultural produce, with a set of scales for weighing hay, turnips and even cattle. (Photo – Kenneth Hynes)

One part was used as a courthouse from 1884 to 1968, and the hall was also a popular dance venue.

The edifice featured in Pat O’Connor‘s film Fools of Fortune (1990), based on a story by William Trevor and starring Julie Christie.

The Midland Great Western Railway was extended from the Hill of Down to Mullingar in 1848, taking in Killucan. The station, closed in 1963, may be reopened in the future.

Thomastown Harbour on the Royal Canal, recently expanded to cater for barge rentals, is the location of Nanny Quinn’s Bar & Restaurant, which has been owned by the same family for over 200 years.

Riverstown, a former estate adjacent to the Royal Canal, is the location of Cunningham‘s, an old-style pub-cum-shop.

The Riverstown River, an oddly-named tributary of the River Deel, is popular with trout anglers.

Riverstown House, now a Nursing Home, has been occupied since 1935 by the Order of St Camillus; members wear distinctive black habits with red crosses on their chests, and a reliquary containing the heart of their founder (d. 1614) inspired scenes of mass devotion locally in the summer of 2010.

Killucan is linked by the R156 to Mullingar.

Rathwire (Ráth Guaire – “Fort of Guaire”) takes its name from an imposing Moat / mound at the western end of the village. This was supposedly built by a chieftain called Guaire, who according to legend is buried within, guarded by a savage dog with a golden collar and chain who chases intruders away.

The Norman magnate Hugh de Lacy built a stone castle against the remains of Guaire’s fort and appointed his brother Robert as Baron of Rathwire. Traces of the medieval edifice can still be seen; locals assert that it is connected to Killucan Abbey by an underground passage.

In 1210 King John received submission from the king of Connacht, Cathal Crobhderg O’Connor, in Rathwire. The English monarch’s prime objective was to subdue the De Lacys, who some locals affirm he defeated at the Battle of Killucan, but this claim is not supported by other sources.

The Barony of Rathwire, later aka Farbill (from Paroiste Feara Bile – “people of the Sacred Tree”), was granted by King Edward I to Roger Mortimer, Earl of March (subsequently hanged, drawn and quartered for High Treason), and then by King Edward III to Sir John D’Arcy, Baron D’Arcy de Knayth, Lord Justiciar of Ireland.

(A branch of the family remained powerful locally for several centuries; the last direct descendant, Lieut. General John Conyers D’Arcy (1894 – 1966), who had participated in the British army assault on the rebel-held GPO in Dublin during the 1916 Easter Rising, served on the notorious North West Frontier of British India between fighting in WWI and WWII, and commanded British forces in Transjordan and Palestine in 1945, lived until 1960 at Hyde Park, the ancestral (1777) estate bordering the Royal Canal, now a stud farm).

St Joseph’s church (RC), a relatively plain cruciform edifice constructed c.1830 and altered in 1866, is somewhat incogruously flanked by a highly ornate Italianate campanile, erected in 1870, which dominates the streetscape of Rathwire.

Lisnabin Castle was until quite recently the residence of the Purdon family (descendants of William the Conqueror’s barber!), who came from Cumbria to Ireland in 1533. The current castellated Georgian mansion was erected in 1819 after their former dwelling was burned down as a result of an overturned candle. The 400-acre estate has been home to a pedigree herd of Hereford cattle since 1824.