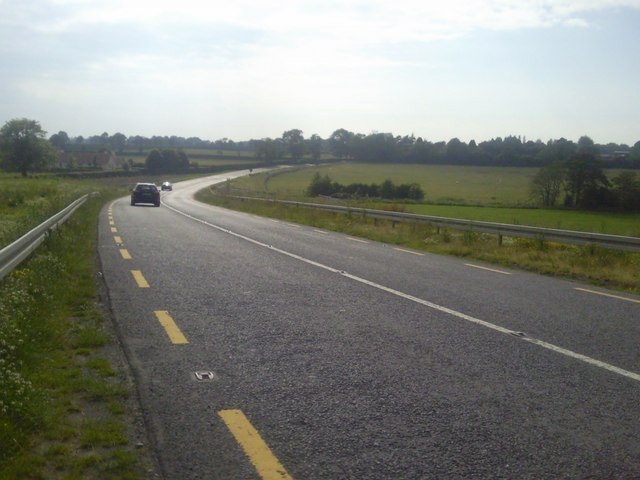 Black Bull is the name of the rural district where the M3‘s Junction 5 meets the R154. (Photo by C O’Flanagan)

Batterstown (Baile an Bhóthair – “town of the road”) is a small village, best known for hosting an annual cycling race.

Caffrey’s of Batterstown is a charming roadside pub / restaurant on the R154.

Doolystown / Doolistown is where the English author TH White lived as a de facto concientious objector from 1939 to 1946 and wrote the last parts of the popular sequence of Arthurian fantasy novels collectively known as The Once and Future King. He was fascinated by Irish culture,  and recorded his landlady saying she had heard the banshee and indicating that most fairies were about three feet high. He tried to learn “Erse“, for which purpose he travelled to the West of Ireland, but met with hostility and suspicion, apparently being regarded as a British spy.

Doolystown Bog is only a small remnant of much larger raised bog which has been largely cut away; however, the remaining portion has been called one of the most interesting bogs in the county, as its pronounced hummock and hollow topography indicates active growth, atypical for this region. Despite being burnt, reduced in size by afforestation, and affected by turbary, drainage, reclamation and roadbuilding operations, with many areas drying out, this bog supports a good diversity of species.

Old Culmullen church was founded by the Norman family Fitzleon and destroyed by Cromwellian forces in 1641. The soldiers got lost in the woods of Culmullen on their way to the Battle of Portlester and camped overnight in the ‘Camp’ field. A medieval sandstone font, now located in the church across the road, bears the marks of the soldiers weapons having been sharpened.

Culmullen Bog was the scene of much activity during the 1798 Rebellion. A group of insurgents camped here overnight before joining the disastrous Battle of Tara on 26th May, and on 12th July the Wexford men army and followers defeated at Clonard and Knockderry came this way to a final dispersal at Ballyboughill. As Col. J Gordon wrote from Trim to Lord Castlereagh: “…….. I pursued the rebels from about Longwood to Kulmullen when the night came on and no account could be got of them than that they had dispersed in all directions. We killed about thirty of their detached parties and stragglers and returned here after a march of 14 hours witout a halt.”  Up to 100 people are thought to have been killed and buried around Culmullen. Others were capured and either executed or transported. A Memorial to the dead was erected in 1998.

The church of  St Martin de Tours (RC), designed by William Hague and completed c.1877, was renovated in 1989.

Galtrim, historically aka Gaultrim / Caltruim, was formerly a place of note, and during the pre-Reformation period was for a long time “the second wealthiest parish in Meath“.

Galtrim is a district of great interest to geologists studying the Quaternary History of Ireland; before 1960s quarrying, this was the only location in the world where an esker could be seen to cross a moraine!!!

It is recorded that in 841 AD Maelduin, Lord of Galtrim, was taken prisoner by the Danes.

Sir John Hussey, Knight, 1st Baron of Galtrim, was summoned to attend Parliament in 1374. One version of his ancestry traces his pedigree to Hollo, Duke of Normandy, while another states that he was descended from a butcher in the town of Athenry, who was knighted for having killed “O’Kelly and his esquire” at the Battle of Athenry in 1316.

A later Baron, Sir Thomas Hussey, was murdered in the C15th; his widow Matilda (née Plunkett)  outlived two more husbands, the first being Sir Richard Talbot of Malahide Castle, which is still reportedly haunted by young Sir Walter Hussey, killed in battle on his wedding day, who points to his spear  wound and utters dreadful  groans.

Galtrim is the name of an electronic abstract “downtempo” drum & bass musical CD produced by Ciaran Byrne in 2006.

Laracor is a rural village and district.

Laracor’s claim to immortality is as  the parish where Jonathan Swift (1667-1745) was appointed rector in 1700 (along with Agher, Rathbeggan, and the prebend of Dunlavin in County Wicklow) and remained, with frequent absences in Dublin and London, until his appointment as Dean of St Patrick’s Cathedral in Dublin.

Only fragments of his Glebe House remain, and the home of Mrs Rebecca Dingley, where Stella (Esther Johnson) came in 1701 to be near him, is in ruins. The willows bordering the stream where the three of them used to walk are the descendants of those planted by Swift.

Many of his tracts and satires were written here, including the Argument to Prove the Inconvenience of Abolishing Christianity (1708) and also part of the Journal to Stella (published posthumously). He kept the living until the end of his life, but seldom returned after becoming Dean in 1713.

Laracor’s former Church of Ireland edifice, built in the early C19th on the site of the church where Swift had officiated, is now a private residence. The adjacent burial ground contains several interesting gravestones.

Laracor is also a brand name for a pharmaceutical product generically known as Oxprenolol, a beta-andrenergic antagonist used  to treat hypertension etc.

Donore & The Hill of Down (Co. Meath / Southwest)

Donore is a small village near the border with County Westmeath, not to be confused with the place of the same name near Drogheda. 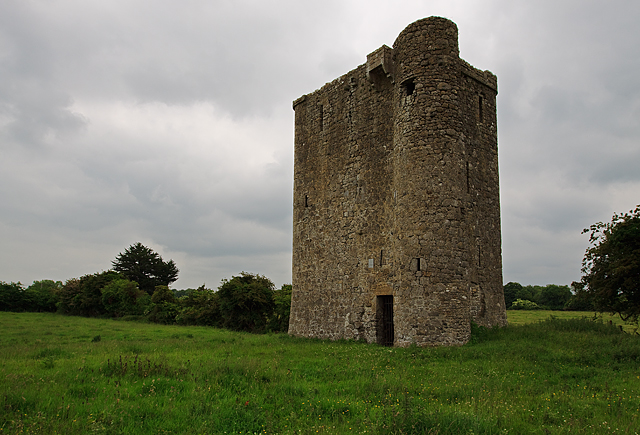 Donore Castle is thought to have been built with the premium of £10 offered in 1429 by King Henry VI’s government, worried by the frequent raids of Gaelic chieftains, to “every liege man” in the Pale (then encompassing the counties of Meath, Dublin, Kildare and Louth) who would build “a castle or tower sufficiently embattled or fortified within the next ten years to wit 20 feet in length 16 feet in width and 40 feet in height or more“. These requirements are certainly met by the inside measurements and height of this simple three-storey rectangular Tower House. (Photo by Mike Searle)

The Wars of the Three Kingdoms brought tragedy to the little castle. After it was captured in 1650, the occupants – James MacGeoghegan and over forty members of his household, including women and children – were all put to death by the Cromwellian General John Reynolds.

The Hill of Down (Cnoc an Dúin) is said to be the burial site of Saint Patrick, Saint Brigid of Kildare and Saint Columba, but this is probably a confusion with the HIll of Down near Downpatrick in County Down.

The hill gives its name to a pleasant residential community on the Royal Canal, with a shop / pub and a water sports centre.

The local railway station, opened by the Midland Great Western Railway in 1847,remained in use on the line between Dublin and Galway/Sligo until 1963; there is talk of re-opening it.

Hill of Down is