Ballycumber (Béal Átha Chomair – “town of the small ford”)  (pop. 900) is a crossroads village on the River Brosna at the western edge of Clara Bog.

Ballycumber House, a former Tower House converted into a Georgian country house in 1748, was the home of the Armstrong family, mainly remembered for the most notorious “Castle informer” in Irish history, John Warrenford “Sheares” Armstrong, whose evidence led to the execution of the brothers John and Henry Sheares, two of the leaders of the 1798 Rebellion. A later landlord called Johnston was the protagonist of the Legend of the Glass Pond.  The house is currently available for holiday rental.

Ballycumber railway station opened in 1862 and closed in 1963.

The church of St. Manchán of Lemanaghan (RC) in Boher, an exceptionally handsome building opened for worship in 1861, houses St. Manchán’s Shrine, created in 1130 at Clonmacnoise and considered a masterpiece of Romanesque metalwork. It was said to contain the relics of the saint, but the antiquary George Petrie reported that he had opened it to find only some black earth and an old chalice.

Lemanaghan / Leamonaghan (Liath Mancháin) is located at a C20th crossroads in the middle of what were historically described as impenetrable bogs, bordered to the south by the callows of the River Brosna, and shares its name with the extensive surrounding parish straddling the border between County Offaly and County Westmeath.

This was the  “island in the bog” gifted to Saint Ciaran of Clonmacnoise by Diarmuid, High King of Ireland, in gratitude for his monks’ successful prayers for victory in battle against Connacht, but conditional upon the establishment of a monastic settlement, duly founded c.645 AD by Saint Manchán mac Silláin, aka Manchianus in Latin and Manahan / Monaghan in English. The monastery is known to have survived until the early C14th, and the medieval church continued in use by parishioners until at least Cromwellian times.

The complex now comprises a graveyard containing several interesting carved slabs, the ruined church and remnants of a C16th priest’s house, with a nearby  Holy Well and a fairy / rag tree (indicating pre-Christisan tradition) and, some 500m away, Mella’s Cell, known locally as Kell, a small stone oratory supposedly built by Manchán as a dwelling for his mother; being female, she had to stay out of sight of his saintly eyes. (The Annals report that Manchán attended an assembly of churchmen in 664 AD at which they insisted that God would send a plague to bring death to a large segment of the Irish lower classes. Manchán was one of the saints to die in the event in 664 AD).

The surrounding area features a network of toghers (bog tracks) and numerous archaeological sites, indicating a considerable level of human activity over the centuries. The entire location is the subject of a proposed Heritage Conservation Plan. An old schoolhouse is currently used as a Visitors Centre.

Pollagh / Pullough (Pollach – “broad expanse of shallow water”) (pop. 230) is a rural village on the Grand Canal and close to the River Brosna. Much of the surrounding area is bogland, and is used to produce fossil fuels such as peat turf.

Although people undoubtedly lived in this area for millenia,the first substantial settlements occurred after 1771, when a new law banning brick-making near Dublin stimulated the industry in the midlands, soon assisted by the advent of the Grand Canal. Pullough’s unique yellow bricks, made from blue silt clay, were particularly prized, and by the end of the C19th century, there were 14 brickyards in Pullough alone.

Turraun Bog was already being harvested for peat in the 1890s. In 1910 the Turraun Peat Company was bought by a Welshman, Sir John Purser Griffith, who drained the bog and later built a peat-operated power station that produced 4,000 long tons (4,100 t) of sod turf each year.

The Turf Development Board purchased the company in 1936. During the WWII / “Emergency” fuel crisis it opened Turraun Camp, where hundreds of workers from all over the country lived while they harvested peat. Shipped to Dublin via the Grand Canal, the peat was sold from huge ricks in the Phoenix Park. The  Board also experimented with the use of charcoal to produce a petrol substitute.

In 1946, Bord na Móna was founded to oversee further development of the bogs,  and became the major employer in Pullough. Turraun supplied high-density peat for the Ferbane Power Station until it was decommissioned in 2002.

St Mary’s Church (RC), originally built in 1907 in the form of a chevron to segregate men from women (and nicknamed “the trouser church”!), is nowadays  noted for two stained glass windows made by the Harry Clarke Studios in 1936, and the remarkable altar, ambo, tabernacle and chair crafted from ancient bog oak by Michael Casey and students of the Celtic Roots Studio in 1991. The church also has a gallery reached by spiral stairs.

Turraun Nature Reserve is based around the former site of the Bord na Móna operations in the area, of which there is still some evidence, such as the old railway line and factory floor. Nearby there are remnants of a charcoal factory from this period.

Much of the bogland that was used for peat production is now under water, as a lake was created to encourage wildlife into the area. The lake is a popular spot for bird watching, and a wooden hut allows for discreet wildlife observation.

A gravel road runs through the reserve to further lakes and a heritage site. This route leads to Lough Boora, also developed as a tourist attraction.

The Grand Canal is increasing in popularity for cruises and draws tourists to the area. The stretch running through Pollagh, opened in 1804, has recently been developed to include a mooring platform, a walkway and a ‘Bog-man’ sculpture. 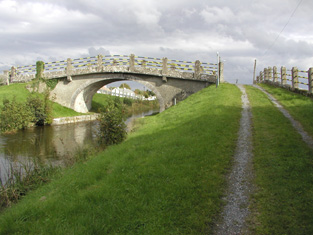 The Plunkett Bridge, built in 1809 on the longest stretch between locks on the canal, is the only bridge in the nearby area that allows for passage across the canal.

The Pollagh Festival is popular with tourists and locals.

Ferbane (Féar Bán – “white grass”, from the white bog cotton which grows abundantly in the surrounding area) (pop. 1200), historically aka Wheery,  is a small town on the north bank of the River Brosna.

The Electricity Supply Board commissioned Ireland’s first milled-peat fired power station at Ferbane in 1957. Since the station’s closure in 2001, a new Business & Technology Park has been developed on the site.

Coole Castle on the banks of the River Brosna was erected in 1575, the last of the MacCoghlan castles to be built. Formerly there was a mural slab in the castle with a Latin inscription that translated into English as ““This tower was built by the energy of Sir John MacCoghlan, Kt. chief of this Sept at the proper cost of Sabina O’Dallachain on the condition that she should have it for her lifetime and afterwards each of her sons according to their seniority“.

(Kilcolgan Court, built by Terence Coghlan in the early 1640s, was visited in 1646 by the Papal Nuncio, who wrote admiringly of  its beautifully laid out gardens with peacocks strutting on the lawns. The castle became uninhabited in the C18th, and the remains were demolished in 1954, with the stones being used to make foundations for the power station at Lumcloon.)

Ferbane railway station opened in1884, closed for passenger traffic in 1947 and finally closed altogether in 1963.

Gallen Priory, now a nursing home, was long  a convent of the Sisters of Saint Joseph of Cluny, built on the site of an ancient monastery founded by the Welsh missionary Saint Canoc in 492 AD, featuring a C13th church and a significant collection of C8th to C11th graveslabs.

In 2007 Ferbane assembled 142 residents to participate in a globally simultaneous dance to Michael Jackson’s Thriller, surpassing Toronto’s 2006 record of 62.

Doon is a small scattered community based around a crossroads. 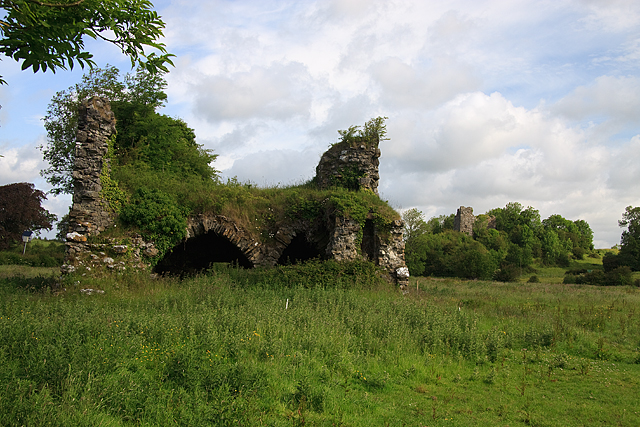 Doon Castle, now derelict, features a well-preserved Sheela-na-Gig, which appears to have been carved standing though she is built into the building on her side.

The Doon is the seat of the Mooney family, who can trace their association with this area back to Normantimes. Located beside a native woodlands and accessed up a winding avenue lined with mature trees, the Georgian house has a splendid limestone Doric portico and a stable yard with a belfry. The main house, walled garden, stable yard, entrance gates and Doon Castle forms an interesting group of buildings.

Ballinahown is lan attractive village setting at a crossroads adjoining an old estate on the County Offaly border. The village is attractive, with well maintained stone walls, mature trees and attractive planting and landscaping, and has been rewarded with the county Tidy Towns title on a number of occasions.