Clara (An Clárach /Clóirtheach – “the plain / level place”) (pop. 3000), effectively the ancient parish of Kilbride in the medieval barony of Kilcoursey, is a scattered community of old townlands, hamlets and modern housing estates based around a relatively small town centre, situated on the River Brosna.

The old Brosna Mill is part of Clara’s industrial heritage. (Photo by Sarah777)

Situated on the Esker Riada, the ancient thoroughfare which connected the east and west coasts of Ireland, the district has numerous ring forts,  suggesting that the early settlement may have been an important staging post for travellers.

An monastic community said to have been founded by Saint Brigid existed at Kilbride for several centuries.

A convent was founded at Gageborough, a townland of Clara, by Matilda (Maud) de Lacy (1223–1289), grandchild of Walter de Lacy, Lord of Meath, and daughter of John de Lacy, Earl of Lincolnshire and Margaret de Quincy, Countess of Derby;  she inherited a considerable fortune on her grandfather’s death on 1241, including  the family castle in Trim, Co. Meath, and a number of estates.  She was married to Peter de Genevre (d. 1249). (The stones from the convent are thought to have been used to construct Gageborough House)

The area was long under the control the Sinnach O’Catharniagh (Fox O’Carney) clan, princes of Teffia, aka the Muinter Tadgain (“people of Tadgain”). In 1599, in order to avoid the complete destruction of his estates following the Nine Years War, the clan chietain Hubert Fox submitted to the Crown scheme of “Surrender and Regrant”. His son Hubert fought against the English and lost, fleeing Lehinch Castle with a price on his head; his land was acquired by a Cromwellian soldier called Samuel Rust.

He in turn sold the district to two Quaker families – the Armstrongs and the Bagots. Andrew Armstrong (1727–1802) established several local industries, notably a lucrative linen factory, and was responsible for Clara’s prominence as a manufacturing town in the late C18th. When he died  the estates wereacquired by the Cox family, also Quakers.

Robert Goodbody (1781–1860), another Quaker, moved his family from Mountmellick to Clara in 1825 and, trading under the name of J & L F Goodbody Ltd, developed the River Brosna to harness power for a series of mills and factories. He married twice and had six children. When he was 74 years old he wrote his Memoirs, which constitute a valuable record of events in the Midlands in the late C18th, including the 1798 Rebellion.

A correspondent to the Kings County Chronicle of 4th March 1857 wrote of the then Landlord, Ambrose Cox, that when he had come into possession of his estate the greater portion of his tenantry were sunk in abject poverty; they were literally penniless but as a result of his reducing of rents and assisting tenants, the tenantry and the Clara estate became independent and “those farmers who only a few years since were the inhabitants of miserable huts and squatted hovels had the happiness to behold them transformed into comfortable dwellings“. It added that when Famine appeared there was little or no poverty or sickness on the Cox estate.

In 1864 the Goodbodys started a jute factory at Clashawaun. The jute was imported from India and the resulting bags were exported worldwide. Other industries in the town included flour mills, distilleries, a brewery, manufacturers of tobacco, soap, candles, and clothes.

The War of Independence opened in County Offaly with a large scale attack by the IRA on Clara barracks on 2 June 1920. Up to 200 men were involved in the attack, which ended ignominious failure, with three volunteers seriously wounded, one fatally.

The last Goodbody’s factory closed in 1984. The family had provided the people of Clara with employment in a number of areas: factory work, domestic service and farming.

Kilbride takes its name from a monastery supposedly founded by Saint Brigid of Kildare (d.c 525 AD) and visited by Saint Kevin; the site on the once sacred druidic Hill of Usny / Uisneagh north of Clara comprises C12th remnants, and is linked by an ancient road to Durrow Abbey, founded by Saint Colmcille / Columba.

The ruins of a medieval church at the foot of Chapel Hill, not far from the monastery, may have been the original parish church.

The ruins of Lehinch Castle, seat of the Fox O’Carney family, are to be found on a hill in Kilcoursey, less than a mile from Clara town centre.

The McAuley family are also associated with the Barony of Kilcoursey.

Mass rocks in the hills outside the town provided secret places for Roman Catholics to worship during the Penal Law times.

Clara House, built by Robert Armstrong, and successively the residence of the Cox and Goodbody families, is now a holistic spa.

St Brigid’s parochial hall was designed as a Gothic Revival parish church, replaced by the current church in 1881. The spire was added in 1910.

The Franciscan Monastery, founded by Matthew Delahunty in 1820, was not completed until 1854. The chapel contains some interesting stained glass windows.

Charlestown House and Inchmore House were both designed by JS Mulvany for members of the Goodbody family.

The Friends’ (Quaker) Meeting Hall on Frederick St, designed by JS Mulvany as an Italianate garden pavilion and built in 1867, is now used by Clara Musical Society. (Photo by Alan L.)

St Brigid’s parish church (RC), an imposing Victorian neo-gothic edifice designed by JJ O’Callaghan, evidently inspired by AW Pugin‘s Killarney Cathedral, stands on the main square in the centre of the town; it was completed in 1881 and preserves a relic of Saint Brigid.

Clara railway station, opened in 1859, is on the main Dublin – Ballina / Westport / Galway railway line. Clara was once a railway junction, with a branch to Streamstown on the now disused Athlone–Mullingar link. There was also a railway junction west of Clara serving the Banagher branch line.

Guglielmo Marconi (1874 – 1937) was a friend of the Goodbody family, from whom he received considerable backing, and during one of his visits to Robert Goodbody at Inchmore House he conducted experiments which made important advances in the development of the radiotelegraph system that revolutionised global communication and won him the 1909 Nobel Prize in Physics.

Vivian Mercier (1919–1989), a Clara-born academic literary critic who wrote a landmark work on Irish literature in 1964 and was regarded as a leading authority on the works of Samuel Beckett, is buried in Clara with his second wife, the children’s book writer Eilis Dillon.

Br Placidus Timmons, OSF (1948–1997), born Larry Timmons in Delvin, Co. Westmeath, was a Franciscan who spent a number of years as a teacher in the Boy’s Primary School in Clara. In 1982 he was transferred to Kenya, where he spent 15 years teaching and helping improve the living standards of local communities. On January 22, 1997 during an armed break-in, Br Placidus was shot dead, murdered for his efforts to obtain justice for the victims of a corrupt regime. His remains were brought back to Clara and a large crowd attended his funeral. He is buried in the community cemetery of the Franciscan Brothers.

Fr Niall Molloy (b.1933), a socialite parish priest, was killed in mysterious circumstances on the night of 8th July 1985 in Kilcoursey House, the home of Richard & Therese Flynn, hours after the wedding of their daughter Maureen. The Garda Síochána found signs of violence in the Flynn’s bedroom and a large bloodstain on the carpet. Richard Flynn was charged with manslaughter. During his trial, defence counsel Patrick Macentee SC QC  suggested that Fr Molloy had died from heart failure, and Judge Frank Roe, a “great friend” of the families involved, directed the jury less than four hours after the hearing began to return a verdict of not guilty. A coroner’s inquest subsequently found that Fr Molloy had died from a “sub-dural haemorrhage consistent with having sustained a serious injury to the head“. The case remains under sporadic journalistic investigation.

Brian Cowen, born in Clara in 1960, was a Fianna Fáil politician who as Taoiseach from 2008 to 2011 presided uselessly over the total collapse of the Celtic Tiger bubble for which he and his colleagues had been largely responsible. Nicknamed BIFFO (“Big Ignorant Fucker From Offaly“), he did not stand in the 2011 election, in which his party was decimated.

Kilmaleady bog, about two miles north of Clara, burst its bounds  in 1821 and flowed for nearly a mile and a half down an adjoining valley. According to Lewis (1837) “Its further progress was arrested by judicious measures, but not till after it had covered about 150 acres, of which 60 to 80 were buried under a superincumbent stratum of bog from six to ten feet in depth.”

Clara Bog, one of the few large raised midland bogs remaining substantially intact, has a classic hummock and hallow surface providing a wide range of habitats for bogland flora and other wildlife. It was declared a National Reserve in 1987 and has been considered for nomination as a UNESCO World Heritage Site.

The bog lies 2km south of Clara town. Access is from the Clara – Rahan road, from where short tracks and boardwalks allow access to the surface of the bog; however, it is unsafe to venture far without an experienced guide.

Clara is linked by the N80 with Tullamore. 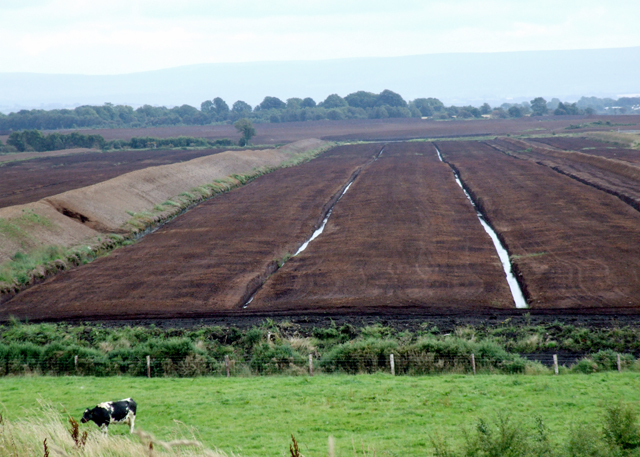