Longwood (Maigh Dearmhaí), historically known as Moordervye / Moydervy, is a village with a wide main street and an old fair green, located near the River Blackwater and the Royal Canal. The Celtic Tiger era saw the population increase dramatically, with many new housing estates in the district, so it is now a commuter satellite of DUBLIN. 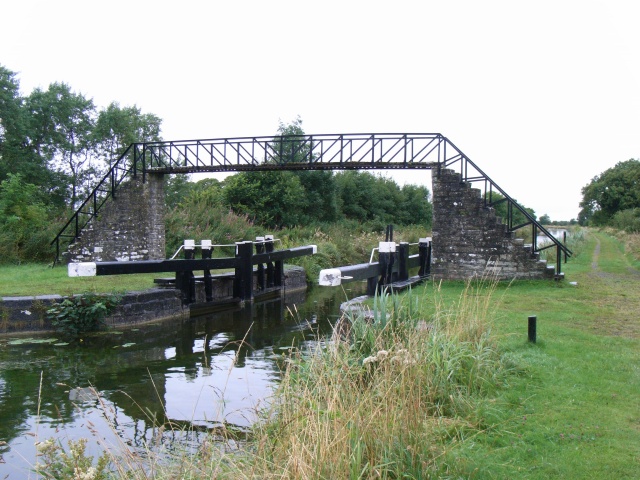 The Ribbontail Bridge & Guard Lock on the Royal Canal is said to have been built to facilitate access to a nearby church, of which no evidence remains. (Photo by JP)

The Edgeworth family were local landlords prior to moving to the County Longford village now known as Edgeworthstown.

Longwood is close to Moyvalley (Co. Kildare) on ByRoute 12.

The Boyne Aqueduct carrying the Royal Canal across the River Boyne is located about 3 km from the village.

Clonard (Cluain Ioraird / Eraird – “Iorard’s / Erard’s pasture / meadow”) (pop. 350), anciently known as Ross Finnchuil, is believed to have been renamed for a local chieftain or landlord. The village is on the R14, which used to be the main road between Dublin and Galway and is still used by traffic avoiding the toll on the M4 Motorway.

Clonard Abbey, founded c.520 AD by Saint Finnian (d. 549 AD), was situated on the River Boyne, the traditional boundary line between the northern and southern halves of Ireland. Clonard became known for fostering a large number of missionary saints who travelled abroad, and at its zenith had a student population of 3000 from all over the British Isles, France and Germany.

The C8th saw Clonard coming under the control of various rival political dynasties, but by the mid-C9th the abbot of Clonard led the clergy of the midlands in the same way that the abbot of Armagh led those in the north. From 1111, it was the See of Clonard (later Meath).

The buildings were sacked many times by marauding Vikings from the C9th onwards, and had fallen into decline by 1202, when the Norman Bishop Simon de Rochfort transferred the See from Clonard to Trim.

Most of the ruins disappeared in the early C19th. Very little remains of the site today. From the air, the outlines of some wall boundaries and other earthworks are visible.

The church of St Finian, constructed in 1808 and used by the local Church of Ireland congregation until closed to public worship in 1991, is said to occupy site of the former monastic church. A stone corbel-head, inserted into the tower above the door, is believed to have survived from a previous edifice, perhaps even the monastery. Some of the old headstones in the graveyard date back to the 1690s. Local Roman Catholic families were also interred here in bygone days.

A local committee are presently negotiating a lease on the church building in order to retain it in a reasonable condition because of the historic significance of its location.

A C12th century motte, the remains of a Norman fortification east of the Clonard River, is a well-known local landmark. Its perpendicular height is 50ft and its lower circumference measures 432ft; the flat top  is crowned by a stately lime tree. (Photo – www.mylocalnews.ie)

(Clonard was not occupied by the Normans until some time after 1177, when Hugh De Lacy directed the military occupation of much of this western area of Meath).

Tyrrell’s Fortified Mansion, built in the C18th to guard an important bridge across the River Boyne, was the scene of the Battle of Clonard during the 1798 Rebellion,  The high sheriff of Kildare at the time was Lieut. Thomas Tyrrell, who with his family and a small garrison put up a spirited defence against a large group of insurgents from County Wicklow and surrounding areas on 11th July 1798, in an engagement that proved to be a turning point in the uprising. Many of the “croppies” were killed, and those who survived escaped to Carbury. Today a few massive walls, porch, and portion of a turret are all that survive of this historic building. The fighting is described Tom Mc Caughren‘s 1998 book Ride a Pale Horse.

Leinster Bridge, a four-arch structure spanning the River Boyne, was built in 1831 to replace a nearby nine-arch Anglo Norman bridge that had proved unfit for the new fangled stage coach traffic when some of its parapet fell. A ford on the river at this point was most probably used by Saint Finian.

The Toll House is an odd little building, aka “the coffin house” due to the unusual shape of its east gable. Tolls used to be assessed according to the width of the iron hoops on the wheels of the vehicles, and many stories have survived locally of ingenious methods to avoid payment.

Clonard Old Inn was situated on the line of the old road over the medieval nine-arch bridge that spanned the River Boyne. Some of the walls and stables have been incorporated into the walls of a farm building. The original stone slab over the Inn door is now an interesting feature on the front lawn of the present farmhouse.

Saint Finian’s church (RC) was built in the mid-C19th to replace a former building on this site. The belfry was added in 1870. Note the stone holy water fonts in the wall beside the original doors, dated 1807 and donated by local landowner R Herbert.  The late medieval stone baptismal font, brought from  the  Church of Ireland edifice when it was closed in 1991, is octagonal in shape with deeply chamfered under panels depicting episodes in the life of Jesus.

A C12th Augustinian abbey dedicated to St Peter once stood nearby, hence the name of the townland: Mulpedder – “hill of Peter”.

Tecroghan / Ticrohan Castle, situated 1.5 miles southwest of Clonard, was one of Owen Roe O’Neill‘s midland strongholds in the 1640s, his son Henry having married Helena Fitzgerald of Ticrohan. The chatelaine remained in residence during the Wars of the Three Kingdoms with a garrison of 1,500 men headed by Sir Robert Talbot.

The Battle of Tecroghan of  19th June 1650 saw about 2000 Cromwellian New Model Army troops led by Colonels John Hewson and John Reynolds, surrounding the imposing fort, attacked by Kilkenny Confederacy forces nubering around 2,600 men under the Ulick Burke, 1st Marquess of Clanricarde, and James Tuchet, 3rd Earl of Castlehaven, who won a heartening but ultimately inconsequential field victory. Within a week the castle was surrendered on lenient terms, and was thereafter sporadically garrisoned until 1680.

Extensive earthwork ramparts survive, as does a ruined church, but the main buildings and fortifications no longer exist. Aerial photography led to the recent rediscovery  of the castle’s surrounding starfort defences, state-of-the-art for the mid-C17th;  an interesting picture of the site can be viewed here.