An Interpretative Centre provides information on one of the most important battles in Irish history.

The Battle of Aughrim was fought  on 12th July  (old style, equivalent to 22nd July new style) 1691. It was one of the most bloody battles ever fought on Irish soil, with over 7,000 people killed, and marked the effective end of the Williamite War.

Following their defeat at the Battle of the Boyne, the Jacobites had retreated behind the River Shannon, which acted as an enormous moat, and had strongholds at Sligo, Athlone and Limerick guarding the routes into Connacht. From this position, they hoped to receive military aid from King Louis XIV of France via the port towns and eventually be in a position to re-take the rest of Ireland.

St Ruth had his infantry drawn up along the crest of a ridge known as Kilcommadan Hill; the left of the position was bounded by a bog, through which there was only one causeway, overlooked by Aughrim village and a ruined castle. On the other flank, St Ruth placed his best infantry under his second-in-command, the Chevalier de Tessé, and most of his cavalry under Patrick Sarsfield.

Ginkel’s attempt to assault the open flank of the Jacobite position with cavalry and infantry ground to a halt after determined counter-attacks; contemporaneous accounts speak of the grass being slippery with blood, and the spot is still known locally as the “Bloody Hollow”. Meanwhile, the Williamite infantry under Hugh Mackay tried three frontal assault on Kilcommadan Hill, only to be driven back with heavy losses and pursued into the bog, where more of them were killed or drowned.

Mackay directed a fourth assault, consisting mainly of cavalry, in two groups – one along the causeway and one parallel to the south. The Jacobites stalled this attack with heavy fire from the castle, but then found that their reserve ammunition, which was British-made, would not fit into the muzzles of their French-supplied muskets. The Williamites then charged again with a reasonably fresh regiment of Anglo-Dutch cavalry under Henri de Massue. Faced with only weak musket fire, they crossed the causeway and reached Aughrim village with few casualties.

A force of Jacobite cavalry under Henry Luttrell had been held in reserve to cover this flank. However, rather than counterattacking at this point, their commander ordered them to withdraw, following a route now known locally as “Luttrell’s Pass”. (Henry Luttrell was alleged to have been in the pay of the Williamites and was assassinated in Dublin after the war). The castle quickly fell and its Jacobite garrison surrendered.

The Jacobite general Marquis de St Ruth, after the third infantry rush on the Williamite position up to their cannons, appeared to believe that the battle could be won and was heard to shout, “they are running, we will chase them back to the gates of Dublin”. However, as he tried to rally his cavalry on the left to counter-attack and drive the Williamite horse back, he was decapitated by a cannon ball.

At this point, the Jacobite position collapsed very quickly. Their horsemen, demoralised by the death of their commander, fled the battlefield, leaving the left flank open for the Williamites to funnel more troops into and envelope the Jacobite line. The Jacobites on the right, seeing the situation was hopeless, also began to melt away, although Sarsfield did try to organise a rearguard action.

This left the Jacobite infantry on Killcommadan Hill completely exposed and surrounded. They were slaughtered by the Williamite cavalry as they tried to get away, many of them having thrown away their weapons in order to run faster. One eyewitness said that bodies covered the hill and looked from a distance like a flock of sheep.

The Williamites claimed at the time to have lost only 600 men, and to have killed fully 7,000 Jacobites. Some recent studies put the Williamite dead as high as 3000, but they are more generally given as between 1-2,000, with 4000 Jacobites killed on the day and reports of as many as 2000 prisoners put to death afterwards. Some estimates put the final toll as high as 9000.

Many of the Jacobite dead were officers, who were very difficult to replace. On top of that, another 4000 Jacobites either deserted or were taken prisoner. What was more, they had lost the better part of their equipment and supplies.For these reasons, Aughrim was the decisive battle of the Williamite war in Ireland, followed by the surrender of Galway City without a fight and the brief Siege of Limerick.

The battle became known in the Irish language tradition as Eachdhroim an áir – “Aughrim of the slaughter”. Since it marked the end of the Irish Catholic Jacobite resistance, Aughrim was the focus of Loyalist (particularly Orange Order) celebrations in Ireland on 12 July up until the early 19th century. Thereafter, it was superseded by the Battle of the Boyne in commemorations on “the Twelfth” due to the switch to the Gregorian calendar (in which 1 July OS became 12 July NS and 12 July OS became 23 July NS). It has also been suggested that the Boyne was preferred because the Irish troops there were more easily presented as cowardly than at Aughrim, where they generally fought bravely.

The field of battle, much changed (the bog is now a well-drained meadow), is dotted with memorials. (Photo – macdonnellofleinster)

The adjacent Glebe School is a rare multi-denominational National School.

Fr John O’Connor, parish priest of Aughrim and Kilconnell, was the last clergyman to be prosecuted under the Popery Acts; his  1822 trial at the Galway Summer Assizes ended in acquittal.

Kilconnell Abbey, a Franciscan friary founded by William O’Kelly, Lord of Ui Maine, in 1414, hosted Archbishop Giovanni Rinuccini, Papal Nuncio to the Kilkenny Confederation on 20 June 1648, and was still home to monks as late as 1785. The abbey is the burial place for the O’Kelly sept, whose family crest can be seen on some of the headstones, and the O’Donellan family, who added a chapel in 1512 and an ornamental cross in 1682. The ruins are maintained by the OPW. (Photo – www.ballyd.com)

Ballinderry House, the former seat of the Comyn family, relatives of Daniel O’Connell, is now a Guesthouse. A tunnel connecting the house with the Abbey is considered too dangerous to explore due to the risk of collapse.

Lough Acalla is a well-maintained lake with a crannog in the centre.

Woodlawn (Móta / Móta Gráinne Óige – “moat of young Grainne”), historically known as Mota and Moote, is a rural village and district with a varied landscape of woodland, bog and pasture. 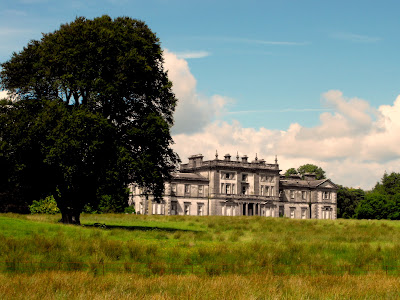 Woodlawn House was built in the late C18th by Frederic Trench, ennobled as Baron Ashtown for supporting the Act of Union in 1800, and was extended and remodelled in the mid-C19th Century, following the marriage of Frederic Mason Trench, 2nd Baron Ashtown to his second wife, Elizabeth Oliver Gascoigne of Castle Oliver, Limerick. (Photo – www.irelandinpicture.net)

It was sold in the 1950s to the Le Paor Trench family, one of whom committed suicide here in 1978.

The reputedly haunted building fell into ruin in the 1970s but is currently due for restoration, along with the beautiful grounds, containing an egg-shaped ice house.

Woodlawn Railway Station, an imposing edifice built by the 2nd Lord Ashtown, was opened in 1858. A modern structure now caters for InterCity services.

The parish church (CoI), built in 1874 by the 2nd Lord Ashtown, contains several Trench family memorials and a mausoleum.

Balllydonnellan Castle was reputedly erected in 1412 on the site of an older stronghold dating from 936 AD, and was home to many generations of the Donnellan family. A C17th extension on one side was replicated on the other when the facade was remodelled in 1787. A fire destroyed one wing in 1913, and the entire complex is now an atmospheric ruin. (Photo – www.ballyd.com)

Dartfield Horse Museum & Heritage Centre is dedicated to Irish horses, dogs and Connemara ponies. Purpose-built by the Field Master of the Galway Blazers Hunt, Willie Leahy, on the grounds of Henry Blake’s 1827 Dartfield House, the museum charts equine history from the earliest times to the present day, and also has interesting displays of vintage cars, old farm implements and domestic appliances etc. The 350-acre estate is home to some of the biggest and smallest horses in existence, and the largest herd of Connemara ponies in the world. Riding facilities are available.

Bullaun is a small village with a strong GAA (hurling) tradition.

The Turoe Stone is a somewhat phallic granite stone decorated with concentric spirals in a continuous abstract La Tène style, dating back to the first or second century BC. Many historians believe that the stone was carved on the European mainland and brought to Ireland in Celtic times. It stood for centuries beside a rath at nearby Feerwore, but was moved in the late C19th to its present location on the lawn in front of Turoe House.