Killaloe Bridge is an elegant arched structure spanning the River Shannon between Ballina (Co. Tipperary) and Killaloe (Co. Clare). The earliest mention of a (wooden) bridge at this point is from 1013. Frequently damaged and more than occasionally unusable, this was finally replaced in 1730 by a stone bridge with 17 arches, later reduced to the present 13. The current structure has in recent years proved inadequate for increasingly heavy traffic, and is due to be supplemented by a new bridge downstream. (Photo – www.clarelibrary.ie)

Killaloe (Cill Dálua – “Lua’s church”) (pop. 1000) is a picturesque town on the western bank of the River Shannon, made up of charming narrow streets of mainly Georgian and Victorian houses on a steep hill overlooking Killaloe Bridge. It is a popular holiday destination, with a wide range of pubs, dining and accomodation options.

The town derives its name from a C6th monastic settlement founded by Saint Lughaidh Lua / Molua (“My Lua”, affectionately), originally on Friars Island, 1km below the present Killaloe Bridge. The monks moved ashore and established an important centre of learning. One of the earliest abbots was Saint Lua’s nephew, Saint Flannan, who travelled to Rome to be consecrated as bishop by Pope John IV.

Kincora (Ceann Coradh), believed to have been located on the hill now occupied by Killaloe, was long the seat of the Dal Cais clan, and specifically of Brian Boru, king of Thomond and High King of Ireland from 1002 until his death at the Battle of Clontarf in 1014. His fort, Beal Boruma, stood 2km north at the head of Lough Derg, where a ford crossed the river. The word Boruma comes from the tribute paid by those crossing and is thought to be the origin of Brian Boru’s name.

St Flannan’s Cathedral was first erected between 1185 and 1225. The cathedral was destroyed and rebuilt in the C14th.

Several members of the O’Briens family, direct descendants of Saint Flannan’s father Tordhealbhach Ui Bloid, held important posts in the diocese both before and after the Reformation.

While some were Papally appointed as Bishop or Apostolic Administrator, English-educated Murtagh O’Brien-Arra was nominated at tha age of 25 by Queen Elzabeth I as one of the first Anglican bishops of Killaloe in 1570, although not consecrated until six years later. He married a cousin from the Inchiquin branch of the family and ruled the diocese for 35 years, while his Roman Catholic counterpart, Cornelius Ryan OFM, plotted and schemed for the disastrous Second Desmond Rebellion and died in Lisbon in 1616.

Ennis was incorporated by Royal Charter in 1613, and the importance of Killaloe declined, although it was home to a major whiskey distillery and a thriving textle industry in the C18th.

The Killaloe Canal was opened in 1799 to bypass the rapids that then existed on the river below the town. It was a vital link for navigation between Limerick City and other river ports such as Athlone and Banagher.

In the C19th the Shannon Steam Navigation Company had its headquarters in Killaloe.

The Brian Boru Heritage Centre (and Tourist Information Office) is housed in the former lock keepers residence at the bridge. Exhibitions trace the life of Irelands greatest King, the history of the monastic tradition, and the development of the Shannon River as a transport system. An audio-visual presentation follows the route the canal boats took to make deliveries from Dublin to Limerick. The staff are very friendly.

St Flannan’s Cathedral (CoI) is a simple C14th sandstone building without aisles but with north and south transepts and a massive square bell tower. (Photo by Andreas F Borchert)

Only a rich arched Romanesque doorway survives of the original (and, it is said, finer) C12th building.

In front of the doorway stands Thorgrim’s Stone (so called because that name appears on it twice), a cross shaft remarkable for its unique bilingual Ogham and runic inscriptions.

A C19th memorial comemorates John Grantham, the first surveyor of the River Shannon, who had steamboats navigating the waterway system as early as 1825. Saint Flannan’s Oratory in the Cathedral grounds is a well-preserved C12th with a steep-pitched stone roof and a carved west doorway dating from the C11th. (Photo by Joe Butler)

The Church of Ireland diocese is now united with those of Limerick, Ardfert, Aghadoe, Kilmacduagh and Emly (known as the Diocese of Limerick & Killaloe for short); the bishop’s chief seat is St Mary”s Cathedral in Limerick City.

The Roman Catholic Diocese of Killaloe (the second largest in Ireland) is a suffragan diocese of the ecclesiastical province of Cashel. The bishop’s chief seat is Ss Peter & Paul’s Cathedral in Ennis.

St Flannan’s parish church (RC) stands on the site where Kincora is believed to have been. St Molua’s / Lua’s Oratory / church, built between 1000 and 1150, was moved in the 1920s to its present site on the parish church grounds from Friar’s Island, submerged by the Shannon Hydroelectric Scheme. The chancel retains its high-pitched stone roof, but the nave is open to the sky. (Photo by Derhur)

The Killaloe Canal became redundant in 1929 when the water level was raised over the rapids due to the opening of the hydroelectric station at Ardnacrusha.

Killaloe is a major centre for watersports (Ireland first saw waterskiing here in 1956), and especially for cruising on the River Shannon. The surrounding area is also popular for hill walking.

The University of Limerick has its outdoor pursuits centre near Killaloe, on the shore of Lough Derg.

Kincora Hall Hotel, overlooking Lough Derg, has its own marina.

Craglea, aka ‘Carrickeevul’ meaning ‘Aoibheal’s Rock’, is a massive natural rock formation projecting from the side of Crag Hill overlooking Greenanlaghna, the ancient seat of the Dál gCais. This was the traditional home of Aoibheal (“The Lovely One”) of Craglea, the goddess protectress of the clan and perhaps the most famous banshee in Irish legend. The story goes that it was from here that Aoibheal hastened in 1014 to Clontarf to warn King Brian Boru that he was to die in the morrow’s great battle against the Norsemen. Towards the end of the fighting the next day, when the king’s attendants suggested to Brian that he move away (he was 73 years old), he said no, he would stay because Aoibheal had already predicted his death. She is said to have left Craglea when the old woods were cut down. New forests have been planted, so she may have returned.

Broadford (Áth Leathan), a small village in the Glenomra Valley below the southern slopes of the Slieve Bernagh Mountains, was briefly fashionable in the early C19th for a nearby mineral spring.

Both the village and its surrounding riverside forests are on the East Clare Walkway network.

Violet Hill to the north of the village is a lovely wooded spot, with mature specimens of oak, beech, and other noble trees.

Doon Woods is located on the shores of the dual-basin Doon Lake, one of the prime coarse fishing locations of the East Clare lakelands.

A famous beauty spot and tourist destination in the C19th, extravagantly hailed as  “the Killarney of County Clare“, it is now run as a Coillte Forest recreation amenity, with parking, picnic and boating facilities. The woodlands are a habitat for red squirrels, pine martens, bats, owls, wood pigeons, jays and songbirds.

Historically, the woodlands and lake were part of the estate of Doon Mulvihill, a medieval Tower House built on the site of an ancient fort granted by King Henry VIII to the MacNamara family, who for some reason appear to have paid rent to the Earls of Thomond. In 1553 the 3rd Earl was besieged here by his uncle Donough O’Brien.

The castle was leased in 1703 by Sir  Theobald (“Toby”) Butler, a famous barrister, wit and toper, Solicitor General of Ireland to King James II and co-framer of the dishonoured 1691 Treaty of Limerick. Himself a Roman Catholic, his nominally Anglican descendants, the Butlers of Millbrooke / Ballyline, were amongst the most influential families in County Clareor more than a century.

Stones from the castle were used in the late C18th for the construction of  a “shooting box” / hunting lodge called Doon House, since demolished.

In 1986 three canoes estimated to be 2,000-2,500 years old were found submerged in shallow water at the northern side of the lake.

A folly in the shape of a little castle overlooks Doon graveyard and comands fine views of the surrounding lakelands. 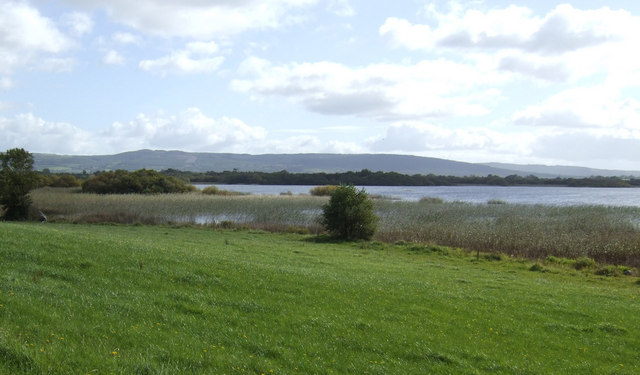 Kilkishen (Cill Chisín) (pop. 450) is a small village in the old Civil Parish of Clonlea.

Kilkishen Castle, a five-storey Tower House with an unusual six-storey stairwell, probably built in the early C16th, is known to have been owned by Rory MacNamara in 1584. Although entire as recently as 1979, the castle has suffered a great deal of damage since, and only the north and east walls now remain standing. The spiral staircase is still intact, but difficult to access and dangerous to climb.

Enagh Castle, a ruin so spectacularly overgrown that it looks like a tree from the distance, would appear to be the former Stackpoole Court, residence of Bartholemew Stackpoole, the Recorder of Limerick who signed the capitulation to General Ireton‘s Parliamentarian troops in 1651, and ancestral home of both the French Comtes / Marquises de Stacpoole and Edmund Pery (1758 – 1844), 2nd Baron Glentworth, created Earl of Limerick in 1803, whose titles included Baron Foxford “of Stackpole Court in the County of Clare“.

Kilkishen church (CoI), erected in 1811 with funding from the Board of First Fruits, is derelict but in reasonably good condition, with impressive beams and original floor tiles.

Kilmurry is the location of Mountcashel  / Ballymulcassell / Ballymulcashel castle, built c.1466 on top of a rocky outcrop by the king of Thomond, Conor na Srona O’Brien (d.1470), and still inhabited until recently.