Cloughjordan / Cloghjordan (Clough Shiurdáin – “stone / castle of Jordan”) (pop. 800) is an attractive crossroads town, notable for its wide Main Street with traditional shopfronts and a handsome tree-lined square called the Church Meadow or Town Green. The community benefits from a wide range of clubs and associations, including a Theosophical Society. Cloughjordan is thought to take its name from the C13th moated Tower House built by a crusading son of Geoffrey de Marisco called Jordan de Marisco for his exploits in the Holy Land, who is said to have inserted a stone from the famous river over the main entrance of his residence.

The first recorded mention of Cloughjordan is in Sir William Petty‘s 1654 Down Survey, where it is described as “600 plantation or Irish acres and 106 unprofitable acres“. This land was granted to a Cromwellian army officer called Captain John Harrison, and developed by his son Col. James Harrison.

On the death of John Harrison in 1741, the estate passed to his nephew, Henry Prittie MP, whose son, also Henry, was raised to a hereditary Irish peerage as Lord Dunalley, later dutifully casting his vote in the Irish House of Lords in favour of the 1800 Act of Union. Locals continued paying rent of one sort or another to the family until the mid-C20th. 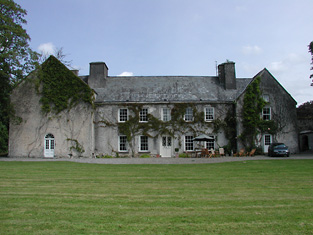 Cloughjordan House on the Shinrone Road was built c.1675 as the Harrison residence, incorporating the de Marisco tower at its eastern end. (Photo – www.buildingsofireland.ie)

The Prittie / Dunalley family lived here until 1828, when they sold the house and demesne (but not the valuable main estate) to the Hodgins family of Dunganstown, Co. Wexford, renowned plant nurseryfolk who made significant contributions to the National Botanical Gardens in Glasnevin.

William Hodgins sold the property in 1914 to Samuel Baker, whose son Val wrote a history of the house, now home to members of the third and fourth generations of the same family.

After the Williamite War, redundant government soldiers were offered plots locally (under the auspices, according to some, of one James Jordan, after whom they claim the settlement was named).

A hundred years later, Cloughjordan had a reputation for Orangeism.

Historian Roche Williams records that “In the early part of the 19th century there was an outflow of people from the area, not due to hunger or poverty, but because of an opportunity that was offered to them to settle in the new world. In 1818 Richard Talbot sailed for Canada with about 160 people, the majority of whom were members of the Church of Ireland, and after a terrible sea voyage that lasted almost two months they travelled by ox-cart to a little community in the wilderness called London, Ontario, halfway between Toronto and Detroit, …… which were then only villages. ……. Each family received a grant of 100 acres of land, on which they cleared the forest, built their homes,schools, churches and developed the roads. ……. In later years others followed and settled nearby.” The surnames of these emigrants included Armitage, Atkinson, Carroll, Dagg, Fitzgerald, Geary, Hodgins, Howard, McIlhardy, Mcloughlin, Powell, Power, Remington, Ryder, Shoebottom, Stanley and Talbot. Many are buried in St Patrick’s Cemetery near Lucan, Ontario.

St Kieran’s church (CoI), an atypipal First Fruits edifice built on the Town Green in 1837 to a cruciform Gothic Revival design by brothers James and George Richard Pain, features an octagonal spire visible for miles around. Inside there is an interesting stained glass window by Nicholson depicting the Archangel Michael weighing souls against a background incorporating biplanes and tanks, originally donated to the church at Modreeny in honour of local men killed in WWI.

The Methodist church set back from the Main Street, erected in 1875, has an active cogregation and is occasionally used for community events.

SS Michael & John’s church (RC), a Gothic Revival edifice designed by George Ashlin and built in 1898, stands on the Moneygall / Templemore Road, providing a dramatic vista on arrival at the town. It has a very fine Harry Clarke window behind the altar and a smaller Evie Hone window to one side.

Cloughjordan was the birthplace and childhood home of the poet Thomas MacDonagh, one of the leaders of the 1916 Easter Rising executed by firing squad. The local library and GAA grounds are named after him.

The Village, an “eco-community” committed to ecological, social and economic sustainability, recently opened at Fairymount Farm the outskirts of Cloughjordan; it is linked with the centre by a new street off the Town Green.

Ardcrony / Ardcroney is a hamlet at the centre of a district noted for archaeological remains.

The parish church (RC), built in 1838, has a rather bizarre “Round Tower” campanile next to it, erected in 1975. An old Mass Rock lies nearby.

The Falkiner family were amongst the leading North Tipperary gentry for 200 years. The first to arrive was Richard Falkiner from Dublin, whose son Richard was born at Ballyrickard House, a handsome edifice erected c.1700 that is still standing. 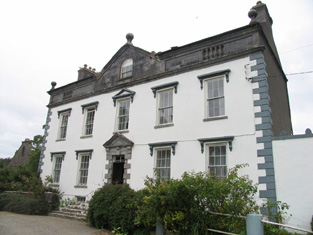 Mount Falcon, built c. 1730 by Richard fils on land formerly known as Kilocaney, apparently got its name from the Gaelic word fabcuin, meaning faucon or firearm.

The Mount Falcon Estate prospered and expanded (the local lake was drained in 1800); the family grew increasingly wealthy, maintaining ther own pack of hunting hounds and later of prize Blenheim spaniels. New generations multiplied and intermarried with other local Ascendancy folk such as the Sadliers and the Stoneys. Lewis (1837) reports Falkiners living in nearby Conger House, Ballinderry Park, Beechwood and several other “gentlemen’s seats” in the vicinity, including the original Ballyrickard House.

The Falkiner males were mostly clergymen (one founded a non-denominational school at Mount Falcon in 1827, but complained that the local RC priest Fr Dunne would not coöperate), solicitors and barristers. Several younger members of the family emigrated to Canada, the USA and Australia during the course of the C19th.

Sir Frederick Falkiner QC, a leading member of the Irish Bar and author of law textbooks, is mentioned twice in James Joyce‘s Ulysses in his judicial capacity as Recorder of Dublin. His son Caesar Litton Falkiner was a distinguished legal scholar, literary editor and Unionist politician. Both died in 1908, Sir Frederick at the age of 77 while on holiday in Madeira, his 45-year-old son five months later while climbing in the Alps. Caesar is commemorated by a bust in St Patrick’s Cathedral, Dublin. Ballylusky Castle was built as an O’Hogan family stronhold in the C13th or C14th. The ruined keep / Tower House stands near the entrance to Mount Falcon. (Photo by BAR1967)

Lough Ourna (“Barley Lake”) is a tranquil expanse of water, mainly known for its birdlife. A safe haven for breeding is provided by an island graced with a ruined medieval Tower House, already derelict in 1640. The are ancient ring-forts on the shore.

The house is approached through a rusticated stone arch, down a long curving tree-lined avenue with lovely views across the lake towards Keeper Hill in the distance. The grounds, maintained as a sanctuary for indigenous and migratory species of wildfowl, comprise 76 acres of beech woodland and formal gardens featuring walled courtyards, gazeboes, greenhouses, orchards, a tennis lawn, rhododendrons, a lakeside path and fairy-fort follies set amongst the 300 year old trees.

Ashley Park, formerly known as Rathone, was acquired c. 1660 by Samuel Wade, whose daughter Elizabeth married John Head, a native of Waterford, in 1692. The current house, built by their son or grandson, was first recorded in 1777 and noted by W. Wilson in his 1786 Post-Chaise Companion.

Bankruptcy forced the 1824 auction of the estate. The property was bought by another local landowner, George Guy Atkinson, who later caused a social scandal by marrying his maid. His eldest son James added the north wing and the Chinese Reading Room following a visit to Hong Kong. In 1903 James’ eldest daughter Alice Marjory married Major Thomas B. Biggs, who changed his name to Biggs-Atkinson; the couple erected the wooden veranda, possibly as a replacement of an earlier feature. She died in 1919 and he later married a very keen plant enthusiast, Bessie (née Dyson), who was widowed in 1945 and ran the estate with the aid of a gardener until her death in 1963.

Ashley Park was purchased in 1983 by Sean Mounsey, who restored the property to its former glory and now runs it with his daughter Margaret as a B&B; midday and evening meals in the elegant dining rooms can be reserved by guests and non-guests alike. The house is also available for private parties and conferences.

Beechwood, formerly the O’Hogan land of Lissiniskey, was long the home of the Toler family, whose most famous member was the notorious “Hanging Judge” Lord Norbury. The parkland demesne is now owned by Nenagh Golf Club.

The Ardcrony Collar is a beautiful C8th golden torc of elaborate Celtic design, found locally in the C19th and now on display at the NMI.

Rathurles is the site of a prehistoric trivallate rath / ring fort enclosing a roofless C15th stone church and several gravestones of the Brereton family. A round Tower House stands nearby.

Rathurles House was built by John Brereton in 1790.