The Kilnahalagh land of the McEgans, hereditary brehons to the O’Kennedys of Ormond and the O’Carrolls of Ely, was acquired by Thomas Sadlier, a Colonel in the Cromwellian army. 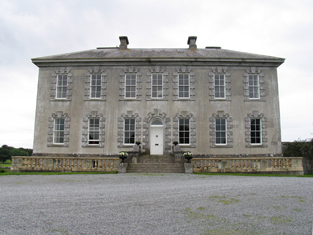 Sopwell Hall, built in the mid-C18th by Colonel Francis Sadleir, has been attributed to the great architect Francis Bindon, who had connections with the owner. (Photo – www.buildingsofireland.ie)

In 1796 Sadlier’s heiress Mary married Frederick Trench, later Lord Ashtown, and the  house remained in the same family’s ownership until 1986.

Ballingarry (Baile an Gharraí) (pop. 600), a former Civil Parish  in the old Barony of Ormond Lower, is a friendly rural community.

Ballingarry’s parish church (CoI), built in 1856, has an attractive octagonal tower and spire. The ancient graveyard, used by both religious communities, is accessed by fine wrought iron gates, and contains the family vault of the Sadliers and Trenches of Sopwell Hall, partially enclosed by the remaining wall of an otherwise vanished C12th church destroyed by fire.

Ballingarry House, built c.1820, is large but not particularly distinguished.

Ballingarry Castle survives only in the form of a bawn across the road from Ballingarry House, and seems to have been used as a walled garden with an orchard. 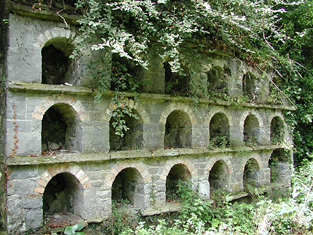 Its most interesting architectural feature is a triple line of 18 bee boles, with arched brick surrounds set in the southeast facing interior wall. (Photo – www.buildingsofireland.ie)

Nowadays it is a refuge for wildlife including pheasants, which eat the ivy berries, and foxes, which may be presumed to eat the pheasants as well as the windfall apples, and which live in the ivy on the wall.

Fairymount Farm, home to the Kenny family for many generations, welcomes visitors to explore its extensive network of walks and trails, taking in several interesting archaeological sites and oak and beech woodlands overlooking Lough Nahinch. Self-catering cottages are available.

Knockshegowna Hill (Cnoc Sidhe Gamhna – “the hill of the fairy calf” / Cnoc Sí Una – “the hill of Una the fairy”) (701ft), a conspicuous landmark aka the Fairy Hill, is is widely associated with the”little people”.

Edmund Spenser made it the dwelling place of the heroine  of his epic poem, The Faerie Queen, and John Augustus O’Shea told WB Yeats in 1888 that there were more fairies on a square foot of Knockshegowna than in all of County Sligo.

The hill is nowadays unfortunately topped by an illuminated cross. erected in 1949 to celebrate the arrival of electricity in this part of Ireland. Virtually the whole of County Tipperary can be viewed from the summit, together with substantial parts of six other counties.

In the Shadow of the Fairy Hill: Shinrone & Ballingarry – A History by Noel W MacMahon was published in 1998.

Capital of the Barony of Lower Ormond, Borrisokane takes its name from the O’Carrolls of Ely, probable owners of the fine bi-vallate ráth / ringfort still visible beside the old Workhouse graveyard at Ballyhaden.

Tombricane Castle, a dramatic ruin overlooking the Portumna road, was an O’Kennedy stronghold, besieged during the Nine Years War and later acquired by the Duke of Ormonde.

The town was founded and laid out in 1661 by a Cromwellian soldier named Captain James Stopford.

The Mill complex on the bank of the Ballyfinboy River, dating from c.1800, retains its full complement of machinery, notably a large internal paddle wheel.

The parish church (CoI), built in 1812, has a handsome bell tower and original windows. There are many interesting old headstones in the well-maintained churchyard, while the interior contains memorials to the once powerful Stoney family, who were granted land locally under the Cromwellian Redistribution and went on to acquire extensive property in the area  (including Arran Hill, Kyle Park and Portland House).

Thebehind the old church centre, a former Roman Catholic church erected in 1832, now used as a community centre and venue for meetings of the Borrisokane Historical Societyold church

Kyle Park Agricultural School, founded in 1834, was one of the first of its kind in the British Isles; unusually progressive, it even admitting women students. In 1843 the Royal Agricultural Society awarded a silver medal to its founder, Thomas George Stoney, who spent so much on relief projects during the Great Famine that he was forced to declare bankruptcy in 1851.

The small Methodist church (1868), still in regular use, displays artistic details such as the panelled gallery and exposed timber trusses of the roof.

A plaque commemorates Micheál Ó Cinnéide, an IRA Volunteer killed on 26th June 1920 in an unsuccessful attack on the local RIC barracks, which was badly damaged but later restored as the town’s Garda station. This was the most notable of several incidents in Borrisokane during the War of Independence and the Civil War that followed it.

The David Clarke Memorial Hall (1930), built with a bequest from and named after the town’s principal  landlord in the late C19th, is the venue for productions by the Borrisokane Dramatic Society.

Borrisokane has an attractive new Town Park and a pretty Riverside Walk.

Dancer Cottage, a modern mock-Tudor house with a lovely garden, is run by Carmen & Wolfgang Rödder as an exceptionally pleasant B&B.

Modreeny, nowadays little more than a scenic staggered crossroads, appears in several documents dating from the C13th to C16th, and was designated as one of nine Special Places of Pilgrimage in Ireland by Pope Paul V in 1607. 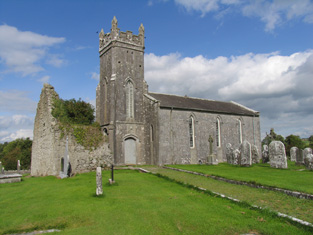 Modreeny church (CoI), a First Fruits edifice built in 1828 next to the remains of the medieval church of Saint Kieran, is now almost derelict. The churchyard contains interesting graves, including that of Capt. John Harrison, who effectively founded Cloughjordan as a town. (Photo – www.buildingsofireland.ie)

Grawn church (RC), in use until c.1900, is now an atmospheric ruin. It was built c.1830 across the road from Grawn / Grawnorish chapel, in existence before 1714 but now vanished.

The Modreeny Ambush was a famous incident during the War of Independence; on 4th June 1921 members of the IRA‘s North Tipperary Flying Column led by Sean Gaynor attacked a mixed group of 25 British soldiers, RIC policemen and Black & Tans, killing four and injuring 14.

Modreeny House, owned over the years by the Head, Whitfield and Swan families, was long the headquarters of the Ormond Hunt, one of the oldest in the country.