Straffan (Teach Srafáin – “the Dwelling of Saint Srafán” / Cluanini – “the little meadows”) (pop. 450) is a village on the banks of the River Liffey, close to its junction with the River Morell. Although many surrounding flood meadows have disappeared under massive housing development, Straffan is still mainly known for its prosperous farms and estates and as a centre for racehorse breeding.

No less than 50 sites of archaeological and cultural interest have been identified in the locality by Kildare County Council, including the 1913 churchyard lychgate that has been adopted as the symbol of the village.

Little is known of Saint Srafán; his feast day is given as 23rd May in the Martyrology of Tallaght, which may be why he is believed to have lived in Tallaght before coming to Kildare in the late C6th AD.

“Trachstraphli” was granted by Strongbow to Maurice Fitzgerald in 1171, and conveyed in 1288 to Richard Le Penkiston by a deed witnessed by three men who gave their names to surrounding townlands – Richard de la Salle (Sealstown), John Posswick (Possextown) and Nicholas Barby (Barberstown).

The area was ravaged during the 1641 Irish Rebellion and the subsequent Confederate and Cromwellian Wars. Many fortified medieval residences were destroyed, including those belonging to disaffected Lords of the Pale such as Garret Sutton of Richardstown and John Gaydon of lrishtown, whose estate included the present Straffan.

Straffan was not directly affected by the 1798 Rebellion, although it was a centre of United Irishmen activity, and many locals participated in the Battle of Ovidstown Hill.

The Straffan Rail Tragedy of 5th October 1853 occurred when a goods train ran in to the back of a stalled passenger train in heavy fog, killing 18 people, including four children as it shunted the first class carriage quarter of a mile through the station (closed 1947). Considered the third worst disaster in Irish railway history, the tragedy was the subject of a poem by Donegal-born poet William Allingham. The spot is said to be haunted by a man with a red lamp.

The ruined C15th parish church at the centre of the village has a distinctive bell cote.

The Church of Ireland edifice (1833) has stained glass windows by Alfred Child and Catherine O’Brien and several monuments to the Barton family.

St Brigid’s church (RC) was founded on land given by the Henry family in 1787, and rebuilt in 1987. While it was undergoing reconstruction the congregation used the Church of Ireland edifice.

The former RIC barracks (1871), a neo-gothic building with gun turrets designed to repel besieging Fenians, has long been in private hands.

The estate was purchased in 1731 for £2,200 by a Dublin banker, Hugh Henry, MP for Antrim. His son Joseph Henry, who matriculated from Trinity College, Dublin at the age of 13, was MP for Longford 1761-68; he is featured in many of the William Hogarth caricatures on display in the National Gallery of Ireland. His son John Joseph Henry, “one of the richest commoners in Ireland”, married a daughter of the Duke of Leinster in 1801, but his foolish extravagance obliged him to sell Straffan in 1808 and live abroad, eventually settling in France. The old house burned down accidentally shortly after his departure.

Slightly downriver from the Henrys’ burned out home, Straffan House was commissioned by Hugh Barton, who purchased the estate in 1828. The mansion was designed by Frederick Darley. Later additions include a distinctive French-style mansard roof, and an Italian-style campanile tower. The Bartons lived lavishly, with 50 outdoor and 16 indoor employees.

Part of the building was demolished before the estate was sold in 1949 for £15,000 to John Ellis, Leeds-born manufacturer of the Bond Minibyke moped. Since then the mansion had more than one dodgy proprietor, including Iranian air force founder and government minister Nadar Djhanbani (1977, shortly before the Shah’s downfall and his execution) and criminal property developer Patrick Gallagher (1979). Another real estate magnate, Alan Ferguson, acquired the estate in 1981 and invested £6m, but never took up residence.

In 1988 the Jefferson Smurfit company bought the house and land for £7m. A further £35m was spent developing the building as a hotel, with a modern wing added in 2004.

Now the exclusive Kildare Hotel & Country Club, generally known as the K Club, is most famous for its golf courses, and also has highly rated accommodation, restaurant and bar facilities.

Straffan Lodge is noted for its dining room, decorated with oak panels in the Tudor style.

Lodge Park, a Palladian house unusual for its four wings, was designed in 1773 by Nathaniel Clements for Hugh Henry, a namesake nephew of the Antrim MP. It was said that when Henry married Anne Leeson, daughter of the Earl of Milltown, he promised her a frontage as long as that of Russborough House. The mansion is now owned by the Guinness family.

The beautiful C18th Walled Garden is noted for its remarkable roserie. Straffan Butterfly Farm (1986) in Ovidstown is an elegant glasshouse menagerie featuring not only beautiful butterflies and moths from around the globe but also a variety of exotic insects, snakes, lizards and HUGE hairy tropical spiders. A must for every arachnaphobe. 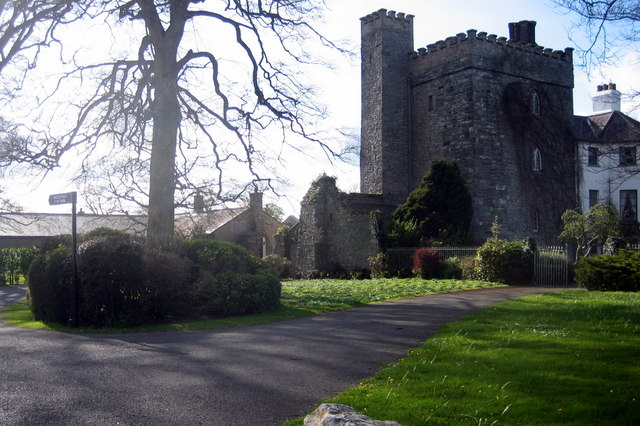 Founded by Nicholas Barby c.1288, Barberstown Castle has had no less than 37 owners, ranging from the Penkistons, the Suttons and the Gaynors, who built the Elizabethan house in the late C16th, through Katherine Dillon and Lord Kingston in the C17th, Bartholomew Van Homrigh, Lord Mayor of Dublin in 1697 and father of Swift’s adored “Vanessa”, the Henrys, Hugh Barton, who added the Victorian house, to guitarist Eric Clapton.

Its 50ft-high battlemented keep, damaged in the 1641 Irish Rebellion, is said to contain a body interred to defeat the terms of a lease due to end “when I am buried underground”. The castle has an C18th “Priest’s Hole” and an underground passage connected to Straffan’s old church.

Since 1971 the complex has been run as an upmarket hotel, particularly popular as a wedding venue.

Castledillon (Disert-Iolladhan – “Saint Iollathan’s hermitage”), situated on the south bank of the River Liffey opposite Straffan, is an ancient monastic site founded by Saint Iollathan, a relative of the Ui Dunglainge kings of Leinster.

In 1202 Thomas de Hereford granted “Thillerdelan” to St Wolstan’s Abbey, Celbridge. By 1294 the church of “Tristeyldelane” was described as “not worth the services of chaplains” in the Calendar of Christ Church deeds. The site is now identified by a pile of stones and one headstone, erected in 1758 to the Spellissy family.

The Castledillon Friars Stone, probably erected for a C15th abbot of St Wolstan’s, was removed to the Visitor centre in Kildare town.

Castle Dillon, a Tower House built c.1271 by William de Mandesham, passed to the Rochford family in 1359. Like many of its neighbours it was burned by government troops during the 1641 Irish Rebellion, but was recorded in the 1659 census as “since repaired by Mrs Bowell”, and remained intact until the C18th, when stones were removed and the building rapidly fell into disrepair. Nowadays only the foundations remain.

During WWI the British Army set up a firing range locally, and a popular song of the period contains the verse: “And when the war is over we’ll capture Kaiser Billy / To shoot him would be merciful and absolutely silly / So send him down to Castledillon among the mud and clay / And let the Crown Prince watch him, as he slowly fades away”.

Castledillon Stud is the headquarters of the Side Saddle Association