Clareen is believed to have been a druidic site where a perpetual fire burned for many centuries.

Founded c.450 AD by Saint Ciaran / Kieran  the Elder (not to be confused with his better known namesake of Clonmacnois), the monastery was the ecclesiastical seat of Ossory until the 1118 Synod of Rathbrasil. After the Norman invasion it came under Augustinian control. The priory was torched in 1548 by a combined force of English soldiers and members of the O’Carroll clan.

The 25-acre site features extensive earthworks, church ruins, the stump of a Round Tower, early graveslabs (including the burial place of the C10th king of Ossory),  and the sculptured base and other fragments of a High Cross. A Sheela-na-Gig found here is now on permanent display in the NMI.

The east gable of the old Church of Ireland edifice contains an attractive C13th traceried window. Within the graveyard is the shell of a medieval gun turret, far more impressive than the base of the round tower on the opposite corner of the church ruin.

Saint Ciaran’s Well is nearby, while Saint Ciaran’s Bush and Stone (bearing a petrosomatoglyph of the saint) can be found about half a mile south of Clareen cross-roads.

Saint Ciaran’s feast day of 5th March is traditionally celebrated with a Pattern.

Mossfield Organic Farm, owned by Ralph Haslam since 1970, produces delicious gourmet cheese in a variety of flavours, and also sells other dairy products such as yogurt and icecream.

Leap Castle, reputed to be the most haunted castle in Ireland, is a late C15th Tower House, long the principle stronghold of the O’Carroll of Ely clan. (Photo by Ziegenheit)

The Bloody Chapel takes its name from a shocking murder, committed in 1532 during a fierce leadership dispute within the family. One candidate, a clergyman, was celebrating Mass when his rival brother burst into the chapel and plunged his sword into him; fatally wounded, the butchered priest fell across the altar and died in front of his family.

In 1659, the castle passed by marriage into the ownership of the Darby family, notable members of which included Vice-Admiral George Darby, Admiral Sir Henry D’Esterre Darby and John Nelson Darby, one of the founders of the Plymouth Brethren. The central keep was later expanded with significant extensions.

Of the castle’s many hauntings, the most horrifying  is described as a small hunched creature whose apparition is heralded by a foul stench of decomposing corpses and sulphur. Some call this an Elemental.

A charming oubliette was designed with a false floor for  prisoners to fall through and land on spikes eight feet below. Those unlucky enough not to die quickly expired agonizingly of blood loss and starvation. Workers cleaning out the shaft removed three cartloads of human bones, amongst which they are said to have  found a pocket-watch dating from the 1840s. It is not known if the oubliette was still in use in that period. The spikes are now covered to protect anyone entering accidentally.

The castle was burned during the Civil War and left to fall derelict. It has undergone extensive restoration since 1991, when it was acquired by Sean Ryan.

At Leap the view across to Slieve Bloom Mountains is quite spectacular.

Glasderry Wood is a Coillte amenity forest park with picnic facilities on the shores of Lough Roe, an artificial lake created to meet the domestic needs of Gloster House.

The powerful menfolk of the Lloyd family were variously MPs in Dublin and Westminster, local magistrates and army officers. The last was Brigadier General John Hardress Lloyd, a distinguished WWI veteran whose marriage to Australian heiress Adeline Wilson led to a major enhancement of the gardens. Her compatriot Dame Nellie Melba once sang from an upper gallery.

Following the General’s death in 1955, the property was sold to the Salesian Order of nuns, who occupied it until 1990. The estate was purchased by its present owner in 2001.

The 120-acre grounds include extensive woodlands, a walled garden, an early C18th folly (the Gloster Obelisk) and landscaped terraces with fountains, waterfalls, streams and ponds fed by an ingenious gravity-based system.

The Gate Lodge has been restored and adapted to provide self-catering accommodation facilities for two people.

Sharavogue Bog, situated in the Little Brosna River valley, is one of the few remaining raised bogs on a flood plain, an increasingly rare habitat in Ireland and Europe. The site not only contains a pristine high bog, but also preserves important relics of the transitional zone between bog and surrounding landscape, containing species-rich fen communities. Such “lagg-zones” have been lost in virtually every remaining Irish bog site as a result of marginal drainage and peat cutting. Two locals, Liam Egan and Patrick Headon, saved the bog from illegal development in 1998 and were presented with an International Award by the Chairman of the Dutch Foundation for Conservation of Irish Bogs, at Groeneveld Castle in the Netherlands.

Cloughmoyle Castle, now a prominant ruin on the steep hill overlooking the bridge spanning the river at the western end of the village, was a fortified house built in the C17th as the residence of the McGuilfoyle family who once ruled the district.

Shinrone is nowadays a peaceful community, but this was not always so. The years 1821 – 1822 in particular saw frequent robberies and murders in the area, attributed to Whiteboy agitation.

Long home to one of the proportionally largest Protestant communities in the Midlands, Shinrone was referred to as “a hotbed of Orangeism” during the 1828 demonstrations for and against Catholic Emancipation. In September of that year, local households were fortified against a proposed march by a large gathering  of Green Boys in Roscrea; bloodshed was averted only at the last minute by the wide publicity arranged by Lord Rosse (of telescope fame) for his military preparations to defend the village on the instructions of the Prime Minister, the Duke of Wellington.

Baptist Wriothesley Noel’s Notes of a short tour through the Midland Counties of Ireland in the Summer of 1836, with observations on the condition of the peasantry (London, 1837) reports that a large numbers of “cottagers” were converted to Protestantism in Shinrone by the evangelism of the Rev Frederick Trench, a member of the powerful landlord family based at nearby Sopwell Hall.

Shinrone in the Tithe War

In 1837 the owner of a local mill, Mr. Thomas Tiquin, was prosecuted for refusing to pay tithes totalling one pound, twelve shillings and eight pence. Although he was defended by the eminent QC, Mr Rolleston of Glasshouse, Tiquin lost his case, was arrested, and confined in the barracks at Shinrone, before being transferred to Dublin’s Newgate prison (now known as Kilmainham Gaol), where despite being “one of the finest young men in the King’s County, upward of six feet two inches in height, and the idol of his neighbourhood” he died shortly after his imprisonment.

Daniel O’Connell and the Catholic Association, realising that the indignation which the trial and death of Tiquin had aroused could be used to bring added pressure on the Government to abolish the Tithes, determined to milk the funeral for all it was worth.

The coffin, borne in a plain hearse drawn by four black-plumed horses, bearing placards that read “Funeral of Mr. Thomas Tiquin of Shinrone, in King’s County, who died on Thursday 30th May, 1837, while under imprisonment in the Four Courts, Marshalsea, Dublin. For The Tithes”, took three days to cross the country, stopping in Kildare, Mountrath and Roscrea. Thousands of people accompanied the cortege on foot, on horseback and in cars, carriages and gigs. It was three o’clock on Sunday when the funeral reached the family burial ground in Banagher, where Tiquin was laid in his grave. It is estimated that in all, 200,000 people took part in the funeral. (Leinster Express, 10th June 1837)

Cangort was the seat of the Atkinson family from c.1600 until 1958. Cromwellian forces destroyed Cangort Castle in 1650. Cangort House is an important C18th building with a slightly ungainly exterior due to C19th alterations. The farm buildings include a range of stables and a huge barn. 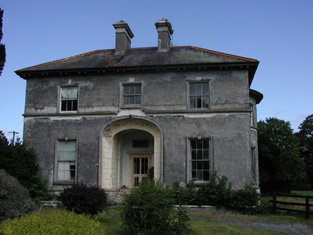 Cangort Park is an elegant two-storey villa, designed by Richard Morrison and completed in 1807 for William Trench, brother of the first Lord Ashtown of Sopwell Hall. It has an extraordinary entrance, and the interior is ingeniously planned with domed lobbies and bowed rooms. (Photo – www.buildingsofireland.ie)

Milltown House, a distinguished edifice with an exceptionally fine facade, was built in 1745.

St Mary’s church (RC) was erected in 1810, when RC priests were still prohibited from performing their duties in any building with a belfry or spire. When it was undergoing repairs in 1980, the congregation shared the Church of Ireland edifice with the Anglican community.

St Mary’s church (CoI), built with funds from the Board of First Fruits in 1820 to replace a smaller medieval church, has an attractive tower, nowadays floodlit by night.

The Methodist church, an attractive little building erected in 1840, is close to the site of a former Dissenting chapel (1890). John Wesley visited Shinrone in 1749, and the local Methodist community dates its origins to 1790.

Kilcommon Abbey, of which only a few overgrown ruins remain in an old graveyard, was a Columban monastery from the C6th to the C13th, famed as a centr of learning. It was here that the scholarly C7th Saint Cuimin meditated on the Paschal Controversy and wrote his Penitential.

Kilcommon Fever Hospital, where the sick poor sought refuge during the Great Famine, is an atmospheric ruin.

Glasshouse is the location of an early C17th sandstone barrel-vaulted forest glass furnace, aka the Shinrone Furnace, believed to have been built  by the French craftsman Abraham Bigo. The only other similar structure is in Jamestown, Virginia. (Photo – Kilcommon Press)

Glasshouse was also the name of a magnificent early C18th mansion owned by the aristocratic Rolleston family, and the childhood home of the poet Thomas William Rolleston (1857 – 1920), widely considered one of the greatest authors on Celtic legends. It was demolished in 1930 by the monks of Mount St Joseph’s Abbey in Roscrea, who used the stones to built extensions to their complex.

The Shinrone Gown is a Tudor-era woollen garment found preserved in a bog near the village in 1843. Kept in the NMI, it has given researchers insights into how ordinary medieval European women dressed. An interesting article can be read here.

President Barack Obama‘s earliest known relative, Joseph Kearney, was born in Shinrone; his family, having lived in the village for four generations,  moved to Moneygall, from where his son Fulmouth emigrated to America in 1850.