Dunmore East is an exceptionally attractive and long-established seaside resort near the mouth of Waterford Harbour.

The village is built in the Breton style, and has several thatched cottages. In the centre there is a C12th Anglo-Norman castle, a pretty C19th church (CoI) with spire and tower, and several good pubs and excellent restaurants.

Once a Packet Station for mail between Britain and the south of Ireland, Dunmore East’s was long the home of an important herring fishing fleet. The harbour, built in the early C19th by the great Scottish engineer, Alexander Nimmo, is still one of the busiest in the country as a port of call for large foreign trawlers and ocean going yachts, and a major sea-angling centre. The cliffs at the entrance have a huge resident colony of kittiwakes.

Dunmore takes its name from an ancient Promontory Fort on the headland known as Black Nobb, where an old pilot station now stands, and beneath which runs a deep cave. 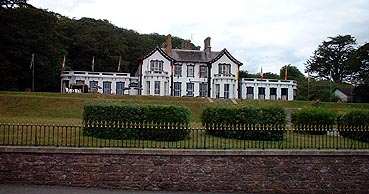 The Haven Hotel, which we can personally recommend, has been run by the Kelly family for over forty years. It was originally the Villa Marina, built as a holiday home for the Malcomson family of Portlaw, who also constructed The Fisherman’s Hall in memory of a drowned son.

Church Villa, a Victorian townhouse, has a long tradition as a friendly B&B.

Above the village the wooded park presented by Lord Waterford for public use in 1926 offers lovely walks.

Badgers Cove and Ladies Cove are the best known of a number of inlets, some of which were notorious haunts for smugglers. The most popular beach is Counsellor’s Strand, where pre-C19th fishermen used to draw up their boat on the sand.

The Dunmore East Bluegrass Festival takes place every year in the village during the month of August.

The extraordinary raised section of the slated roof is almost certainly unique. The upward-pointing structures on the spire are reminiscent of Viking embellishments in old Norwegian churches. The four walls that surround the centre portion of the church are all curved, as a result of which the church has superb acoustics – a joy for visiting choirs.

The embossed plaster ceiling rose contains a shamrock, a rose, a leek and a thistle, symbols of Ireland, England, Scotland and Wales, presumeably some kind of anniversary acknowledgement of the 1800 Act of Union, popular with Roman Catholics at the time. Above the tabernacle and again in front of the altar, a pelican can be seen feeding its young with its blood (a mistaken belief in olden days, used to symbolise Christ).

Like many C19th churches, fixed benches attached to the walls were the only seating,  used exclusively by the elderly and infirm; this originated the old expression about people ‘going to the wall‘, meaning that they were not as robust as they once were.

Dunmore East is linked by the R684 to Waterford City.

Ballymacaw is a tiny picturesque village with a cove.

Rathmoylan is the location of a Promontory Fort, and a nearby Standing Stone known as the White Lady can be reached over rough ground. Enquire locally for directions.

Waterford / South East Regional Airport, about 6km inland, is used for scheduled Aer Arann flights to the UK and France, and is home to an Irish Coastguard Service rescue helicopter.

Two towers were erected on Brownstone Head by Lloyds of London in 1823 as navigation aids, because of the frequency of shipwrecks in the vicinity. Their construction (and also those on Tramore Head) was prompted by the 1816 sinking of The Seahorse with the loss of 363 lives.

Tramore Bay, between Brownstone Head and Tramore Head, is bisected by a sand and gravel spit stretching west-east, called The Strand, leaving only a narrow sea opening at The Burrow into the area known as the Backstrand.

Tramore Head (formerly Great Newton Head) is capped by three tall navigational pillars, also erected by Lloyds in 1823. The central column is topped by an 18ft statue of a sailor called The Metal Man, a semi-official symbol of Tramore, whose constant chant is said to be “Keep out, keep out, good ship, from me, for I am the rock of misery“. According to tradition, any woman who manages to hop around the base three times will be married within a year.

The western side of the Bay has some attractive inlets, including Newton Cove and Guillemeane Cove.

Tramore (Trá Mór – “big beach”) (pop. 9,350), once Ireland’s premiere seaside resort, has a magnificent setting on Tramore Bay, between The Strand peninsula that carries the town’s famous Promenade and Tramore Head to the southwest. The toponym refers to a 5km stretch of sand and dunes, popular with bathers and considered one of Ireland’s`principal surfing locations. (Photo by Fecoo)

The seafront is the epitome of Tackyville, with slot machine arcades, candy floss stands, fast food joints and  “fun for all the family” at Splashworld or the Amusement & Leisure Park.

The town itself, built on steep hills rising up from the beach, features handsome  architecture, and must have been rather elegant in its day. When last there we found it rather tawdry, full of raucous pubs  offering vulgar cabaret acts and sing-alongs. Pity.

The Coast Restaurant is critically acclaimed for both its service and its chef, who by all accounts would seem to be Ireland’s answer to Ferran Adrià and Heston Blumenthal.

Tramore Racecourse is picturesque and eccentric; it holds regular meetings during both the Flat and National Hunt racing seasons. The first meeting of the calendar is on New Year’s Day, and the mid-August holiday racing festival is good fun.

Tramore House Gardens have a formal section and informal woodlands. Features include a timber pavillion, a stone grotto and a rocky cascade down to a still pool, lushly planted with bamboo. Here bluebells and tiny narcissi carpet the ground in spring.

Tramore is linked by the R675 to Waterford City.