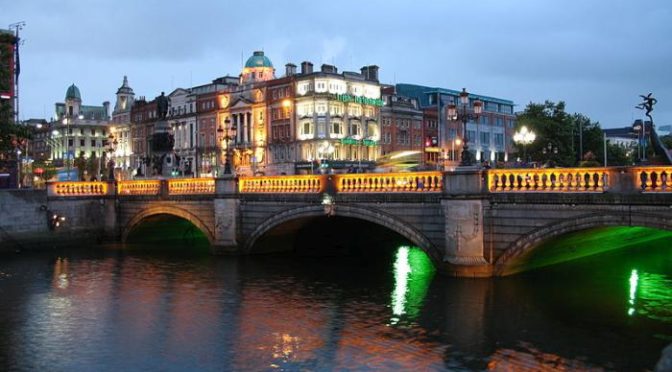 The city of Dublin occupies a generally flat site, bisected by the River Liffey into the South Side and the North Side. The river is spanned by ten bridges, notably O’Connell Bridge and the Ha’penny Bridge.

DUBLIN (Baile Atha Cliath) (pop. 1,002,000), established by the Vikings as a walled town in the C9th, has been the Capital of Ireland for over a thousand years. It has always been the only real city in Ireland, and was used as a base by the English from the C12th onwards to administer and “civilise” the rest of the island (with varying degrees of success!). It reached its architectural apogee in the C18th, at the height of the Anglo-Irish Protestant Ascendancy. In the C19th, it was regarded as the Second City of the British Empire, after London. It is famous for its literary and theatrical traditions and perhaps even more for its pubs. The city is full of interesting historic buildings, libraries, churches, museums and galleries. Dublin has one of the youngest populations in Europe, reflected in the vibrant music scene and lively nightclubs. The Carnival in June and the RDS Horse Show in August are summer highlights. END_OF_DOCUMENT_TOKEN_TO_BE_REPLACED