Welcome to www.irelandbyways.com, best viewed using the most recent version of Google Chrome. If this is your first visit to this hobby site, click here. You are also invited to “¨Like” our Facebook Page.

Pathetically little progress made since recommencing work last month; specifically, apart from a few running repairs and minor improvements to various pages, ByRoute 1 has advanced from the western side of Killala Bay, the River Moy Estuary and Ballina (Co. Mayo) to Tiraragh and Easkey (Co. Sligo), a distance of less than 20km. Nevertheless, I have enjoyed researching this interesting corner of Connnacht, and that is enough to justify this hobby website!

Christmas 2012 Query (reposted and rephrased): Can anyone tell us the name of the powerful Irish film made in the 1970s / 1980s involving a simple-minded girl in an C18th / C19th rural family who becomes enchanted / by the wild and wonderful fiddle music played by one of the Straw Boys at her sister’s wedding party and grows increasingly orgiastic, with a goat-headed pagan deity / devil presiding?

Our Easter 2012 Query, seeking identification of these “abandoned college ruins on the Ballyman Road near Bray” (below), received a suggestion that the site could be Jubilee Hall, until recently occupied by the Elian Spanish School. Can any other reader confirm / add to this information? 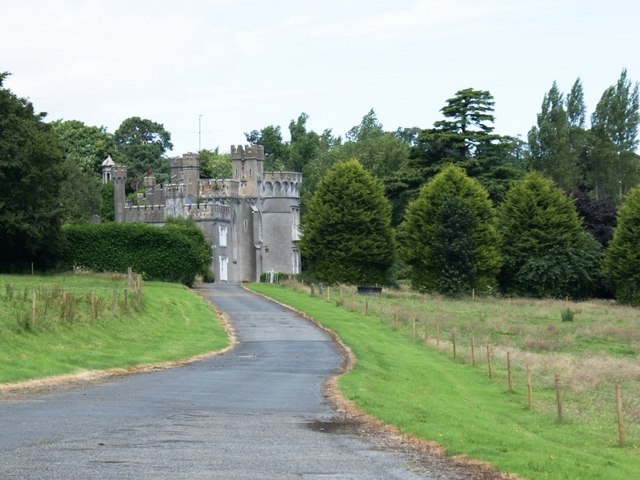 The material contained in this website is, to the best or our knowledge, true and accurate at the time of publication and is provided solely for informational purposes. All information on this site is intended to be accurate, complete and timely. We cannot accept any liability whatsoever for any loss or damage howsoever arising as a result of use or reliance on these web pages, or on the information thereon, or in respect of any links accessed via these Web pages. No information on this site is intended to serve as legal advice.

© Copyright Restrictions apply in varying degrees to the material on this website. All text has been copyrighted automatically under the Berne Convention for the Protection of Literary and Artistic Works 1886, as amended. However, several sections of text and most images are available in accordance with the principle known as “copyleft” under the terms of the GNU Free Documentation License (GFDL).

The information provided on this website has been gathered from a wide variety of sources, and has been checked for accuracy. Every effort has been made to present the information without infringing the rights of others.

Queries and observations should be sent to fraba4@gmail.com

Best wishes to all visitors to this website  for a happy and prosperous 2014. The Image above was chosen to reflect the destructive power of the elements much of Ireland and its neighbour had to contend with over the festive period. Work on the current and additional pages will resume shortly.

Good news: my worst fears proved ungrounded when I went to the ophthalmologist, and I have been given an optometrist’s prescription for new glasses, to be worn only when working with my PC. I hope to purchase them over the next few days. After three months of doing virtually no work on this site, I am looking forward to  renewing my hobby with restored vision and a new lease of energy and enthusiasm.

Another month with almost no work carried out on this website, but this time for a very different reason: eyesight problems. At this stage I should explain that of the four original contributors I am the only one still regularly active, but it would seem that spending so many hours hunched over a computer has had an adverse effect on my vision. However, I hope to receive a new lens prescription soon.

Previous Image of the Month: Road near Pearse’s cottage in Rosmuc, Co. Galway, with  Cnoc Mordain in the distance and the Twelve Bens behind that (Photo courtesy of the excellent Facebook page Mythology Ireland)

Over a month has passed since any work has been carried out on this website. We are unrepentant, as we thoroughly enjoyed our holidays (in England – beautiful Northumbeland, vivacious London, pretty Sussex and charming Kent, especially sunny seaside Deal – and Spain, specifically Catalonia, where today is a highly significant date), and return refreshed to the fray.

We are pleased to report further work on Westport & Environs (mainly Louisburgh / Delphi) and Sligo Town & Environs, plus the first pages of ByRoute 1.6 linking the two. At this rate we MIGHT have covered most of the Republic by Christmas!

While regular visitors will also spot a number of updates on other pages, we have to admit that maintenance work is falling WAY behind, and would really appreciate some new assistants. If interested, please contact fraba4@gmail.com

Previous Image of the Month: Benbulben‘s tabletop viewed from the court cairn at Gortnaleck near Grange (Co. Sligo), soon to feature on ByRoute 1.  (Photo from The Sacred Island, a fascinating website about Irish megaliths, especially Carrowkeel)

Alleluyah! We are delighted to report that ByRoute 17 is virtually complete, with three new pages exploring County Sligo, and that further work on Sligo Town & Environs.

The most exciting development this Bank Holiday weekend (in the Republic) is that we hope to finish ByRoute 17 in the very hear future. Regular visitors will also spot a number of changes, repairs, improvements and updates on other pages.

We are currently seeking volunteer helpers from Northern Ireland, especially Belfast & Environs. We would also appreciate contributions about districts in and around  Dublin, Cork and Galway cities. If interested, please contact fraba4@gmail.com

Another long lapse since our last homepage update, missing both the annual festivities of  St Patrick’s Day and Easter – but we have in fact been very busy, and are delighted to report (finally, only a year and a third behind schedule!) that ByRoute 16 is  virtually complete, subject only to a couple of minor details along the newly added western stretch of  ByRoute 16.2. We also hope to finish ByRoute 17 fairly soon.

Regular visitors will also spot a number of changes, repairs, improvements and updates; however, we have to admit that maintenance has fallen behind as the website has grown, and we are therefore seeking volunteer assistants. We aim to start work in the near future on ByRoutes 20 – 26, and are  particularly anxious for helpers from Northern Ireland, especially Belfast & Environs. We would also appreciate contributions about districts in and around  Dublin, Cork and Galway cities. If interested, please contact fraba4@gmail.com

Today’s publication of the long awaited McAleese Report into Ireland’s Magdalene Laundries, where Irish girls and women were for all practical purposes imprisoned and enslaved for the “sin” of sexual activity, while their children were removed at birth and often illegally exported for adoption, is by far the most significant event of this year in terms of coming to grips with our national identity.

Here are some principal findings of the report into the ten laundries run by four religious orders, the last of which only closed in 1996: since 1922, 10,012 women inmates (excluding the two laundries operated by the ironically named Sisters of Mercy); 2,124 put there by the State, and some 1000 by their own families; 13.5% of entrants had no living parents; the average age on entry was 23.8, with the youngest being 9 and the oldest 89; 7 months was the median duration of the stay; at least 879 deaths occurred in the laundries since 1922, the youngest at 15 and the oldest at 95.

In the detailed report Senator Martin McAleese (the former President’s husband) recognizes the “deep hurt they [the women] felt due to their loss of freedom, the fact that they were not informed why they were there, lack of information on when they would be allowed to leave, and denial of contact with the outside world, particularly family and friends.”

That such practices were not only allowed but actively colluded in and even policed by the Irish state for most of its existence since independence is  shameful proof of the country’s  voluntary abasement to religion at its fanatical worst. The few surviving victims most certainly deserve generous compensation.

Fifty years ago, the capital’s dirty sheets were washed and ironed by about 25 companies, including the Kelso Laundry in Rathmines and Darty / Dublin Laundry (1888-1982) in Milltown. The laundry in the High Park convent near the Archbishop’s Palace in Drumcondra was one of the belatedly notorious Magdalene Laundries, as were those tun by contemporary institutions in Donnybrook and Dun Laoghaire.

The “Swastika Laundry (1912)” had its distinctive red delivery vehicles emblazoned with a swastika, meant as the ancient Sanskrit solar symbol of good luck, health and prosperity. The foundation year was added to the corporate name in 1939.

Heinrich Böll, writing about living in the west of Ireland in the 1950s in his Irisches Tagebuch / Irish Journal, recalled that while in Dublin before heading to County Mayo he “was almost run over by a bright-red panel truck whose sole decoration was a big swastika. Had someone sold Völkischer Beobachter delivery trucks here, or did the Völkischer Beobachter still have a branch office here? This one looked exactly like those I remembered; but the driver crossed himself as he smilingly signalled to me to proceed, and on closer inspection I saw what had happened. It was simply the “Swastika Laundry,” which had painted the year of its founding, 1912, clearly beneath the swastika; but the mere possibility that it might have been one of those others was enough to take my breath away.”

The company (one of whose owners also had a successful racehorse called Swastika Rose) continued to trade until c.1970 (this writer clearly remembers their battery-powered electric vans), and the tall industrial chimney over their former Shelbourne Road premises bore their logo until c.1988.

It’s been a while since our last homepage update, but we have not been idle. While we regret that there is still little progress to report on ByRoute 16 or ByRoute 17, a lot of work has been done on other pages, notably sections of ByRoute 1, ByRoute 2, ByRoute 3 and ByRoute 4 dealing with parts of Counties Wicklow, Wexford, Carlow, Kilkenny, Tipperary and Cork.